So now the real/reel blogging begins…

I would like to dedicate my first entry to the beautiful Brief Encounter of 1945.
This is one of my favourite films and I only had the pleasure of my first screening of this film last year. It is a film of the utmost compassion and tragedy. A story filled with so much soul and human anguish that it tears me to pieces on every revisit. 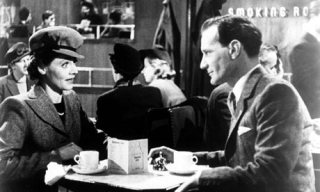 Director David Lean took a very different approach to the film’s narrative, that other directors may not have. Adapting it from the original short play, Still Life by Noel Coward, Lean turned the narrative on its head. Opening with the goodbye between two lovers, the story then turns to the female protagonist returning home to her husband. Celia Johnson plays our protagonist, Laura, with such conviction and intensity that I find myself only realising how much I care about her as the credits roll and I have transformed into a complete emotional wreck.

We witness her re-live the entire encounter inside her own head, as though she is addressing her husband. We see her meet the charming Doctor Harvey on several chance meetings and we witness them falling into a dangerous world of obsession, love and adultery. This gradual realisation that they are in love is devastating as they are both committed to separate marriages. Being made in the 1940s, we have to appreciate that this film was always going to end tragically for the pair and marriage and family life was always going to be honoured. Lean represents all of these things in the most beautiful way. The ending of this British cinematic masterpiece is one of my favourite sections of film I have ever viewed.

I beg you all to watch Brief Encounter and feel for these characters in the same way that I do. It may be an oldie and the lack of colour may put some of you narrow minded sorts off. If this is the case then please believe me when I say that this film is so artistically filmed and beautifully constructed that is has stood the test of time and, even sixty-five years on, it has not aged a day.