It is no secret that I am a loyal Woody Allen fan. I am fascinated by the man and I suspect that if I were to rate my top 100 films then 50 of them would be his. I admire his use of script and his talent as a visual and verbal comedian. A man who started in stand up comedy, Allen never lost his sense of timing or comedic roots. Not all of Allen’s films are comedies. Emotional character explorations are the focus of his intelligent work such as Husbands and Wives and Hannah and Her Sisters. Allen has also featured in the majority of his own films and recently made a delightful appearance in Sophie Lellouche’s Paris-Manhattan. A film that uses so many of Allen’s romantic ideas and atmospheres, Paris-Manhattan, the story of a woman and her obsession with Allen and his movies,delightfully summarised my personal love of the man and his movies.

One of Allen’s greatest contributions to cinema, besides the dazzling Annie Hall which is arguably responsible for the creation of the romantic comedy, is the rather under-appreciated The Front. The story of one man’s struggle to maintain his career and protect the reputations and careers of his close friends during the McCarthy witch hunts of Hollywood in the 1950s, The Front is a witty and tragic look at the individuals effected. The story breezes by for the first hour which makes the last segment of the film even more shocking  and impacting. The Front tells the story of ‘the people’ and leaves you with a lot to think about. Within The Front, Martin Ritt’s political drama, there is a lot to be admired.

It is rare for Allen to be credited for just a single contribution to a movie. Here, he merely acts; ‘merely’ being a clumsy and inadequate term to have used. For once, Allen is not writing, directing or controlling the picture. He appears as some what of a guest in a film that does not belong solely to him. However, this does not hinder his performance. Seeing Allen take his performance to a deeper and more intense level is thrilling, especially for a fan girl such as myself. Allen has a subtlety that propels his character forward throughout the film. His character’s sensitivity and simple mindedness is what draws the audience to him and, ultimately, results in their connection with The Front. 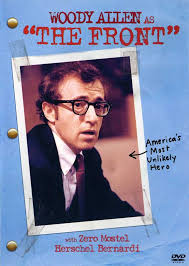 Like any other Allen text, The Front owes a debt to its characters and its dialogue. Comedy is there to enhance the audience’s experience and helps to keep the plot moving. Allen is playing his most unusual character and manages to break out of his typically paranoid protagonist, (only slightly, but it’s enough to make this picture and this character work). The Front is a humble and majestic piece of cinema and, for a Woody Allen fanatic, is as crucial viewing as Annie Hall, Sleepers and Midnight in Paris. Not as important as Manhattan though; no film is as important as Manhattan.

One response to “The Front.”