Remaining loyal to a book is a braver feat than we may automatically presume. Luhrmann’s The Great Gatsby is the latest adaptation of a piece of classic American literature and he has been both criticised and commended for his personal take on one of America’s most beloved novels. It seems, these days, many film makers are devoted to transforming and recreating literature and, although I am not claiming that this is a bad thing, I am simply pointing out that perhaps the days of simplistic story telling are gone. For me the greatest screen adaptation of literature is visible in Robert Mulligan’s cinematic retelling of To Kill A Mockingbird from 1962. There is something fantastically basic about the film that allows the characters, and the stories they tell, to resonate vibrantly through the screen.

The screen presence of Gregory Peck is second to none. Even in his more flawed performances and confused roles – such as Captain Ahab in John Huston’s Moby Dick – Gregory Peck is always moving and always a source of cinematic impact. But Gregory Peck was born to play Atticus Finch. His portrayal of the father, lawyer and controversial forward thinker is utterly compelling and every element of Finch is explored and expressed by Peck. His gentle approach to Atticus highlights everything that made him such an outstanding character of literature. Peck has transformed Atticus Finch into a remarkable character of cinema. Peck provides the perfect balance between the lamb and lion that is Atticus Finch. A man of bravery and honour who protects and educates his children, it is justice that defines Atticus Finch. His disgust of injustice drives him and brings out the anger and the frustration of the character. Atticus Finch is the definition of human empathy and his character is made up of selflessness and a strength like no other. Gregory Peck accomplished something remarkable in the role of Atticus Finch but all of his accomplishments are carried out with the most gentle of convictions. 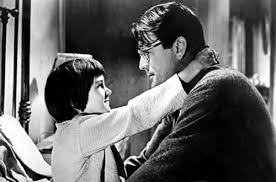 We cannot over look the other actors and actresses that make this film a fitting tribute to such a prolific piece of literature. The characters of Harper Lee’s exquisite novel are all expertly captured by those chosen to play them. The children of Atticus, who are the main focus of the narrative, are executed effortlessly and, more importantly, simplistically. Mary Badham is charismatic and loveable as the eyes of the action and the confusion of injustice, in the role of Scout. Philip Alford is equally remarkable as Scout’s brother Jem, the character who expresses the anger at the injustice he comes to know and understand. Both performances are warm and do justice to the characters of the novel. Collin Wilcox-Paxton’s fragile and raw performance highlights the suffering of one of the books most controversial characters, Mayella Ewell.

I have always found great joy in cinema that sees through the eyes of children. It is an excellent tool especially when looking at human prejudice and cruelty. Robert Benigni’s Life is Beautiful was the first film I saw to introduce me to this and it reassured me how innocence and naivety can be used to emphasise human injustice. To Kill a Mockingbird remains my favourite book due to its use of children in exploring racism and violence. Combine this with the imagination of childhood that is presence in the sub-plot of the mysterious Boo Radley, and we have the same charisma and charm that is present in The Spirit of the Beehive. It it is easy to see why this is such an important story to America and the human spirit. With such a colossal reputation riding on the film’s source material it is astounding that Mulligan’s film is just as prestigious and impacting on audiences. An important story that deserved an exceptional screen adaptation, To Kill A Mockingbird stands alone as one of the greatest book and film combinations that worked on every level, perfectly simplistically.
Thanks for reading and let’s all keep supporting our beloved film industry.