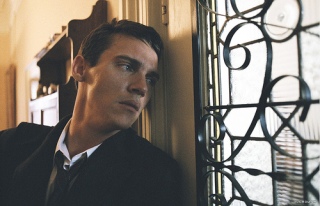 Woody Allen has stated that Match Point is his personal favourite of all the films he has made. It is by no means my favourite of Allen’s works of art but it is easy to see what it is about this film that the director would cherish and be proud of. Most commonly associated with comedy, Allen constantly surprises me when I sit down to watch a more serious instalment of this visionary’s portfolio. The foolish protagonists of Bananas and Sleeper become distant memories once you let yourself become engulfed in his tragic and dark works such as Interiors. Allen, although a champion of verbal and visual humour, has also mastered portraying the emotion, isolation and sadness of family, relationships and self loathing. Match Point also brings to light his ability to muster suspense and maintain narrative intensity. Crossing over slightly into the crime and thriller genres, Match Point is exciting, captivating and refreshing; Woody Allen’s cinematic adaptability shining through every sequence.

Chris Wilton wants what he can’t have. As the movie progresses, he sinks further and further into a restricted lifestyle; suffocated by marriage, family and the possibility of offspring. His life is comfortable but empty. Passion, recklessness and desire are drained from him and are non-existent in a lie of a marriage. All of these attributes are present in Nola Rice, played by Scarlett Johansson. She is the epitome of lust and sexual longing to Chris. As their affair begins, blossoms, develops and crumbles Chris is left with the struggle of protecting his wife – for whom he cares but does not love – his job and, more selfishly, his luxurious lifestyle. Chris’ desire and decisions lead him down a road that you will not necessarily see coming. A film of two halves, Match Point begins like any other Allen drama but gradually descends into an exploration of human capability and the depths that we are possible of sinking to in order to protect ourselves from our mistakes and pasts. The more intense Chris’ situation becomes, the more enthralling the story is. Whether it’s due to their smugness, their clingy-ness, their dishonesty or their sheer luck, all the characters are completely unlike-able. Yet, it is difficult to stop caring about what happens to them. There is a constant air of doom and destruction that waits behind every corner of the story, ready to pounce. Whether you care about the characters or just care about them getting their comeuppance, it is difficult to avoid being mesmerised by Match Point.

Scarlett Johansson is a limited actress. She is, more often than not, wooden and unconvincing. Here, she fits into the role very well, despite there still being a “what if..” battle going on in my mind after discovering that the flawless Kate Winslet was first choice for the role of this twisted and broken femme fatale. Brian Cox and Penelope Wilton are superb assets to the cast and, although their screen time is limited, demonstrate how to transform Allen’s typically American situations into British dilemmas. Matthew Goode is particularly great as the smarmy friend and foe to both Chris and Nola. Emily Mortimer brings all of the claustrophobia and annoyance that the plot needs and is the main tool used by Allen to cramp and restrict Chris, who is played wonderfully by Jonathan Rhys Meyers. The lack of comedy compliments the film and Allen’s risky move to a European setting. Match Point is Allen’s longest film to date. At just over two hours in length, the plot has time to transform and develop. As the minutes travel past, the complexity of the story deepens, leading to a deliciously satisfying conclusion. From the opening moments, the importance of luck within the plot is established and this continues to be a strong presence within the situations and predicaments our protagonist faces. 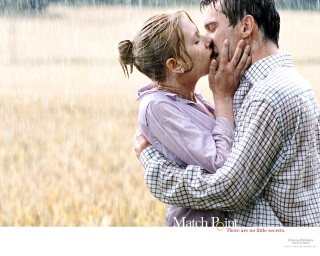 Match Point is about empty people in empty relationships and empty lives. There is no genuine love here; only empty love. Passion and desire are portrayed darkly and dangerously and there is no sense of spiritual passion, just broken individuals hunting for a thrill and a feeling. Woody Allen tackles dark desire and secrecy scarily well. This unnerving tale of human lust and insincerity will remain in the back of your mind for some time. It is a modern movie marvel from a man who never fails to surprise and shock. Human obsession, addiction and distraction, however natural and unavoidable, are explored here as being damaging and soulless – just like the actions and choices of our lead character.