“We have a long and proud history of recognising the right of others to determine their own destiny.”
– Margaret Thatcher on the Falkland Islands. (1982) 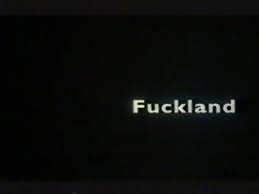 In 1995 Danish directors Lars Von Trier and Thomas Vinterberg created Dogma 95. A film-making movement that revolved around a specific manifesto, Dogma 95 created a way for unknown film-makers to create films based on traditional values. The aim of the movement was to create films that were as authentic as possible. Directors were not to be credited and no artificial lighting or pre-prepared props were to be used. The camera work was to be entirely handheld, adding to the documentary quality of Dogma 95. According to the official Dogma website there have been a total of 35 Dogma films to date although there is doubt surrounding just how many there have been. It is an interesting movement that created an interesting landscape in which film-makers could work. However, there is just one Dogma 95 film that I would like to discuss here and that is Dogma #8 – Fuckland. In 1999 Diego Dubcovsky illegally filmed Fuckland. Set and filmed in The Falkland Islands, the story is about an Argentinian man who travels to the Falklands, meets a British citizen and plans to impregnate her. The film is underlined with some darker discussions about the Argentinian and British tensions that remains long after the conflict ended in 1982. The film only contains two actors. Everyone else who featured in the film was unaware that they were doing so and, as it turns out, I myself was one of them.

As a film student, currently studying my MSc, I was told about Fuckland by one of my lectures when Dogma 95 cropped up in conversation. There was already an element of coincidence when I told my lecturer that I had actually grown up in the Falklands. A week or so later I eventually got round to looking up Fuckland interested to see what a film about my childhood home would look like. You can imagine my surprise when, less than five minutes into a clip of the film, I saw myself, my brother and my father on the screen before me. My initial feelings were ones of violation and confusion. It was unnerving to see my eight year old self and my six year old brother caught on film for about fifteen seconds, totally unaware of the camera that hangs around the neck of a stranger who is shaking my father’s hand and making conversation with him. After phoning my father and brother to explain what I’d found I felt a little less uncomfortable. Having the absurd finding described to them over the phone didn’t seem to leave them feeling uneasy as it had me. I felt initially angered by what I had found; a feeling I find difficult to explain. I experienced an instinctive sense of having been exploited, which perhaps makes some sense of this hostility. It turns out I was not the only person to be angered by Fuckland. This article from 2000 explains the fury of the Falkland residences who also underwent feelings of invasion after being taken advantage of.

Keeping the bigger picture in mind, Fuckland, which I have only seen 8 minutes of, seems to comply with other works of the Dogma 95 movement. There is nothing out of the ordinary about the way that real people have been unknowingly captured and for all I know there could be another woman on the other side of the world who is also currently discovering her own past film career in Dogma 95. I react to my presence in Fuckland as a film student as well as a past Falkland Island citizen. Documentary films often succeed because of the use of secret filming and the results and evidence it can produce. I would feel less uncomfortable about Fuckland if it was not a piece of fictitious, entertainment cinema. After all, I never minded spotting myself on BBC’s Ground Force or Songs of Praise when both programs brought their filming equipment to the Falklands. We are currently in an age of weakened privacy – where our personal lives are documented and exhibited all over social media, documented forever. In my lifetime, human communication has developed and transformed past recognition. I am aware that my involuntary inclusion inFuckland changes nothing in my life and if my colleague had chosen not to mention the film to me a week ago I would still be traipsing through the world, as unaware of my cinematic debut as I was for the previous 15 years.

I have tweeted the films “creator” (we dare not call him a director at the risk of disobeying the precious manifesto) informing him of my discovery. Of course, I won’t hear back. What seems like a huge deal to me is of no interest to anyone else and remembering this fact makes me feel more at ease with Fuckland. I adore cinema and am fully aware and respectful of the sacrifices that it requires in order to accomplish greatness. Yet, my haunting and absurd findings have made me question the vulnerability of the unknowing. What harm does such work do if the people being filmed never find out – or even if they do, as I have? I use the words “find out” lightly as there was never anything being hidden from me – well, except for the light of a record button. Cinema has a responsibility to maintain an integrity in what it is showing and doing. I am sure that in a matter of weeks my Fuckland finding will be nothing more than an anecdote that I can share with friends and film students. It is almost reassuring to know that even if my film writing career fails, I will always have my Dogma 95 career – I jest. I am fascinated and affected by my reaction to seeing myself as a child in Fuckland. Perhaps it is evidence of just how powerful and truthful cinema can be. I just wish I could get hold of a full copy of Fuckland so I have a truthful answer when the adoring fans and paparazzi start to ask “So, that illegal movie you made your debut in, was it actually any good?”