I recall one of my university lecturers (who specialised in film, spirituality and religion), talking about Malala Yousafzai in 2012. At the time she was in intensive care in Birmingham hospital. I vividly remember her claiming that if this young girl were to survive it’d be one of the most powerful, game-changing things to ever happen in the international fight for women’s rights. Three years later and Malala is the youngest ever Nobel Peace Prize winner who continues to campaign for the right to an education for every child in the world. Now deeply woven into our popular culture, Malala continues to advocate on behalf of her cause whilst also dedicating herself to her personal education in the UK. He Named Me Malala brings her book to the big screen, looking at her childhood in Pakistan, her experience under the Taliban’s viscious regime, her ongoing advocacy around the world, her life at home with her family and her experience of celebrity status and life in the West. He Named Me Malala will play perfectly to a younger audience and makes for essential viewing for high school children who take education for granted. The film is on a mission to show her as both a global symbol for peace and a regular teenage girl. Although it is nice to see her at home with her family, the documentary wastes too much time on the futile. We know she’s a teenager, that’s what makes her so remarkable, so hearing her questioned about why she fancies Roger Federer seems like wasted time in the presence of greatness.

At only 87 minutes in length, He Named Me Malala is at its most powerful when it shares with us archive footage of a younger Malala’s activism in her beloved Pakistan. We’re all familiar with her famous speech that she gave to the United Nations but its a whole different type of powerful to see her speaking before her assassination attempt took place. We see brief clips where we would like to see longer segments. Her astonishing bravery is most present in these moments, displaying both her determination and the extreme danger she was willingly placing herself in. I was also distracted by the film’s over use of its score. I found the music to be manipulative and unnecessary. Beautiful animation is also incorporated but far too heavily relied upon, making certain sections of the film feel directly and lazily lifted from her book. I was impressed with how the film addresses loneliness in an unfamiliar country and the power of education over a women’s future in Pakistani families and cultures. The film explores Malala’s father as much as her – his story being a similarly interesting and courageous one. Moving and insightful, this also allows us to see where Malala’s own boldness comes from. At times He Named Me Malala feels a little unavailing, but is still a vibrant depiction of a striking role model for women, a valiant warrior and the peaceful nature of Islam which is so often ignored by ignorant, unjust press. It is also a sensitive portrayal of  a burning desire to return to one’s true home. 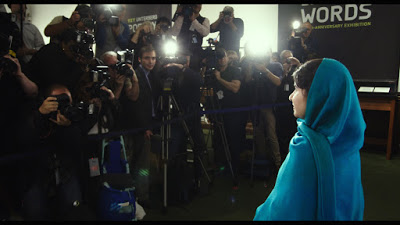