Born to Be Blue.

By delicately and thoughtfully multi-layering fact over fiction, Robert Budreau’s Born to Be Blue is a beautifully textured, loose interpretation of jazz musician Chet Baker’s 1960s comeback. We first meet Baker on the floor of a damp Italian jail cell, withdrawing from heroine. Moments later, we’re in a world of fast pace black and white, like something from a Fellini or Godard picture. What initially appears to be a flashback is in fact the set of a fictitious film in which Baker plays himself. What follows is a compilation of distorted truths as Baker, following a violent assault, discovers he may never be able to play his trumpet again. Simultaneously he finds himself going clean for the longest stretch yet, sourcing strength from a new romance with his defiant co-star. At the heart of the story is Baker’s desperation to regain the musical superiority he once had, something that his heroine addition both enhances and destroys. After the experimental biopic disaster that was Miles Ahead, one couldn’t help but hear alarm bells when the details of Born to Be Blue were first announced. A dedicated Hollywood star transforming into a jazz icon, a purposefully improvisational take on the true story and addiction and lost love at the centre – on paper, both films had so much in common. Not only does Born to Be Blue escape the recent curse of the musician biopic but it’s also an impressively stylish, twisted exploration of Baker and all his demons. In its sharpest moments, this feels like the work of Paul Thomas Anderson.

Hawke tells us a lot about Baker through pitch and volume. He shows us his arrogance, his ambition and his self-destructive tendencies, sometimes just with a subtle mannerism or quiet comment. Hawke doesn’t give us all of Baker – almost keeping the audience at arms length, perhaps to allow us to experience what his lovers and wives personally battled with. Carmen Ejogo is the fictitious Jane – Baker’s companion and strength throughout the film but who suffers at the hands of her infatuation and dedication to him. Ejogo is a divine actress, her character’s softness sanding down Baker’s own sharp, splintered edges. Jane is an amalgamation of several women who featured prominently in Baker’s life and Ejogo expertly combines their loyalty and devotion with self-assurance and assertiveness. There are performances in vintage looking recording studios and internal battles between the art and the drugs that fuel it. There are moments of betrayal and broken friendships, all of which are customary in such a film. Yet, originality triumphs through the balance of rich sounds and a variety of visual aesthetics, from the smoky grey depictions of the infamous New York jazz club Birdland to the Instagram-like sepia tints that coat the camera’s lens during the scenes set in the late 60s. Born to Be Blue says a lot by showing just a little. There is no clunky exposition or montages of adultery and drug use that we’ve seen countless times before in the likes Ray and Walk the Line. By keeping things simple, Born to Be Blue is able to harmoniously blend the man with the myths. With Hawke at the top of his game, captivating use of sound and cinematography and the raw emotion brought by Carmen Ejogo, Born to Be Blue is an unexpected delight. Brimming with stylish sorrow and passion, it’s the first film of 2017 to spark my award season fuse. 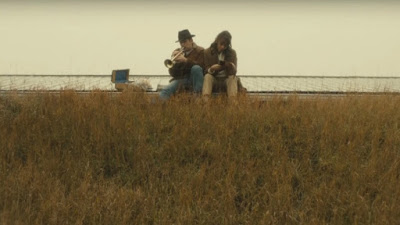