New Zealand journalist David Farrier seeks out the strange and the sensational for a living. He has made a career out of entertainment reporting which often includes interviewing life’s true individuals. He is one of the co-directors of Tickled a documentary funded by a 2014 Kickstarter campaign with the erotic fetish of competitive tickling torture and endurance at its core. When Farrier enquired about doing an interview with one of the few companies producing videos of this somewhat niche activity, he got a very unexpected and rather unsettling response. What follows is an exploration into the faceless people behind this unique market and the villainous figures lurking in the shadowy corners of the internet, hiding behind keyboards and abusively asserting their power over others. An underdog’s tale, Tickled is both charming and satisfyingly sinister from start to finish, with national treasure Stephen Fry on board as associate producer and a generous donor to the film’s original financial campaign. If you head into this film expecting it to be about a funny fetish you will be surprised, hopefully pleasantly. Tickled takes its name from a rare sexual indulgence that begins as its subject before simply becoming the springboard which catapults the filmmakers into a dark world of torment, blackmail and mystery.

Farrier himself is a charismatic presence and shares similarities with the likes of Louis Theroux. Tickled can also be closely compared to Theroux’s My Scientology Movie from earlier this year. Both films deal with nasty controlling individuals whilst also standing back and despairing at the bizarreness of it all. In its darkest moments there are scenes reminiscent of Catfish with the online explorations that are undertaken throughout Tickled. Others have drawn comparisons between Tickled and the controversial HBO series The Jinx which also deals with crime and failure to serve justice. Despite a few issues with pacing and a few moments that needed more explanation, I was ultimately very impressed with what Tickled accomplished. In some ways it managed to do what any good documentary should do, lift the lid on injustice and delve into a world that’s darker, deeper and more complex than originally expected. Standing up to bullies who protect themselves with wealth – therefore getting away with a tirade of abusive behaviour – Farrier has produced a fascinating and shocking piece of documentary cinema. Tickled successfully balances its amateur charm with the cold hard facts at its core; lulling you into a place of comfort before smacking you around the face with a big reveal. 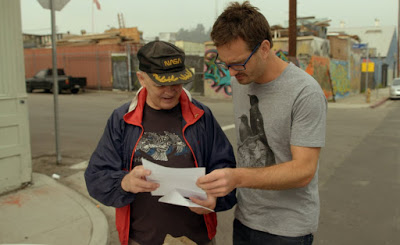