Shot over three years, Jenny Gage’s All This Panic is a monumental achievement; a glorious meditation on the awkward and undefined transition between childhood and adulthood. Focussing on the changing lives of a small handful of Brooklyn girls, it is a heartbreakingly nostalgic documentary, which expertly captures those bizarre, minor, authentic details that define the hazy period every girl finds herself in after leaving school and before entering the real world of work. The panic the film’s title refers to is that of selecting the perfect outfit for the first day of the new school term. Two friends scroll through endless photos that display potential options for the big day. This amusing exchange seems so insignificant and silly but the girls are a stark reminder of just how crucial such choices were, once upon a time. The film’s most prominent character seems to be Lena, a kooky individual whose short hair and thin frame make her stand out from the crowd in the film’s first few segments. Lena’s family life is evidently chaotic, with a separated mother and father who repeatedly accuse one another of neglect. Lena’s best friend Ginger has an abruptly different family dynamic, as part of a bohemian, inner-city modern hive of honest parenting. Their friendship is at its most exposed when they quarrel. Hearing the two bicker about the correct processes to follow when your friend passes out at a party makes for humorous viewing but is also full of honesty, something I haven’t seen on screen before, in such a raw state. 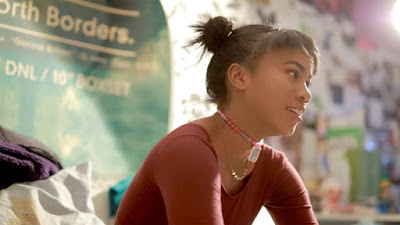 One of the film’s most tragic scenes takes place at a house party. Footage of the night swirls before us whilst Lena recalls the ‘point of the party’ – in this case, a boy. Her brash truthfulness is at times overwhelming as she recollects the sobering moment her affections were rejected. All This Panic is the type of film I wish I’d taken a torch and a notebook to, so as to capture the endless lines of truth, both witty and woeful, that seem to pour endlessly from the mouths of its subjects. It’s a film that will remind you of all the first cigarettes, all the 4am phone calls and all those long summer days and nights. All This Panic, with its claustrophobic camera techniques and its flexible approach to chronological storytelling, reveals that intimate experiences like this are universal and transcend generations. It also pays great attention to not only the transformations the girls themselves go through but also looks at the fragility of their relationships and friendships; breaking my heart a thousand times over as Ginger expresses her fear of becoming just a ‘high-school friend’ to Lena when they find their paths drifting apart. What Gage has created is a timeless capsule of the female spirit on the cusp of womanhood; a little blunt, a little bruised and utterly unapologetic. All This Panic lets the girls it follows tell their own stories as we walk in and out of their lives over several years. The girls’ honest truths will drag up bitter-sweet memories for any woman watching who remembers the buzz of a first kiss, the rush of a first cigarette or the frustration of having to start figuring out your place in the world.