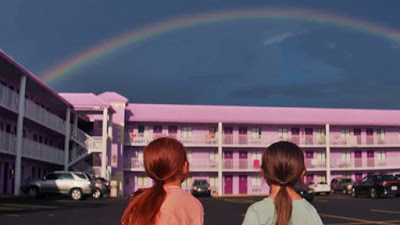 Sean Baker’s Tangerine exploded into cinemas several years ago, a feisty tale of a prostitute’s mission to seek revenge on her cheating partner and pimp. Shot entirely on an iPhone, the film was a conversation piece within DIY cinema and a demonstration of the vast capabilities of talented artists who perhaps don’t have the tech or cameras presumed to be needed to really make a piece of cinematic film. Now Baker returns with The Florida Project, an observational tale of one young girl, residing in a shoddy motel with her loving but troubled mother. Baker chose to set Tangerine against the backdrop of Christmas in L.A., the holiday season providing a lovely juxtaposition to the harsh life of sex work on the streets for the women at the heart of the film’s narrative. He does something similar and equally effective in The Florida Project. The film’s location sits on the outskirts of Disneyland, with the motel itself heavily coated in sickly pastel pinks and purples. Young Moonee and her mother are never more than a few minutes’ walk away from merchandise outlets and helicopters repeatedly taking off to give wealthy tourists a bird’s eye view of the magical kingdom. Meanwhile, Moonee spends her time causing mischief and havoc for other residents and tormenting Bobby, the exasperated but kind-hearted motel manager. Grubby, and hyperactive, Moonee is the assertive leader of her gang of thieves and rascals. With no rules or sense of consequence instilled in her by her carefree parent, Moonee spends her days fighting off boredom, the unconventional fairy-tale queen of all that she surveys from the rusted bars of the first floor balcony.

With its beautiful, meandering narrative, The Florida Project is an emotive, unapologetic tale of unconventional childhood thriving on the fringes of society. It’s also very much a film about motherhood. What Moonee and her mother have is a mutual respect and deep understanding of one another, there is vast love from mother to daughter but equally an undeniable element of unintentional neglect. The film raises complex questions about parenting, exploring both selflessness and selfishness and the devastating impact class, wealth and culture can have on someone’s ability to efficiently parent a child. Present throughout is Willem Dafoe, giving a sensitive and subtle performance in which frustration constantly bubbles just beneath a thin surface. Bria Vinaite gives an astonishing debut performance as the antagonistic and contradictory Halley, mother to Moonee. It’s a performance as raw and exciting as Sasha Lane’s in American Honey and Arielle Holmes’ in Heaven Knows What; two other recent independent gems about women on the outskirts of American society. There is no doubt that this is Brooklynn Prince’s film – the seven-year-old’s performance is astounding. She demonstrates a real confidence and sense of ownership, evidently a natural actor and not just a child star. She oozes charisma even with every spit ball and swear word that frequently leaves her mouth. I had no idea where The Florida Project was going to take me, but it was very difficult to care as I was in such wonderful, compassionately crafted company.

Thanks for reading and let’s keep supporting our beloved film industry.