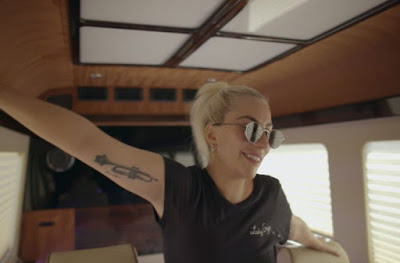 I’ve been a longstanding Gaga fanatic since Fame Monster landed back in 2009, finding myself captivated by her angsty ballads such as Brown Eyes and Speechless. It was an album that defined my last long summer of freedom before heading off to university. When Born This Way arrived two years later I was once again won over by the mainstream singles, meanwhile falling eternally in love with the sorrow and romance in the likes of You & I. Every album brings a burst of brand new inspiration and although each album suffers from slight bloating caused by some unnecessary filler there is always enough heart and soul to drag me back to my love of Lady Gaga; more than anything as a vocalist and lyricist. My relationship with Gaga’s work is reflective of her public persona – ultimately a truly gifted performer but often shrouded in layers of publicity stunts and insincere mystery. The arrival of Netflix Original Documentary Gaga: Five Foot Two will intrigue anyone interested in an insight into both the star’s professional and personal life. Documenting the creation of her fifth studio album Joanne, and leading up to her Superbowl Halftime Show performance, this is an enjoyable but ultimately too tightly controlled journey into the private corners of Lady Gaga’s empire. We spend a lot of time in the presence of her friends and family as well as in the studio with producer Mark Ronson. Still bruised from the breakdown of her engagement and relationship she’s tentative about revealing a more stripped back version of herself in an album that finally comes from the ‘natural’ Lady Gaga I’ve always longed for. As a fan of the artist and less of the ‘art’ that comes with it, it was joyful to spend time in the jeans and t-shirt reality of the star’s daily life.

We’re presented with a relaxed version of Gaga often in her house or displaying her friendly relationship with her manager, dancers and employees of the Haus of Gaga. Still, we witness her intense loneliness – all worsened by her ongoing struggles with a hip injury from three years prior. We witness her as an emotional and fragile individual who also has her fair share of stubborn, diva-driven moments. You can’t help but feel that the singer’s image remains largely constructed through the film’s editing and her occasional urges to play up to the camera. At times it feels as though the film is a little too keen to show just how ‘normal’ the girl behind the name really is. What remains throughout the film is a sincere and relentless devotion to her art, her family and her fans – often voicing her ongoing concerns that some of her fans might not accept her on an album which, compared to the likes of the problematic and confused ARTPOP, strips her almost completely naked. Perhaps not as revealing as some viewers may hope, Gaga: Five Foot Two is still an intriguing portrayal of an artist facing the ongoing physical and mental struggles that comes with long term injury. Less of a documentary and more of a companion piece for the album’s release, which evidently didn’t have the explosive impact it was predicted, this is a film which poses as a reveal of the ‘real’ but what is revealed sadly feels slightly staged and manipulated. Thankfully, it’s not quite the meat dress incident all over again.