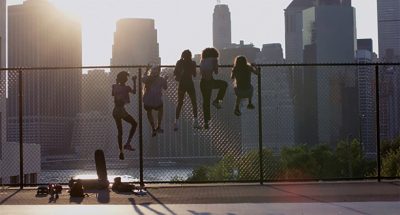 Crystal Moselle’s follow up to debut The Wolfpack is being praised as a docudrama-hybrid; a scripted, fictional narrative woven into the director’s real-life experiences with an all-female Manhattan skate collective. Loner Camille, lives an isolated existence across the water in Long Island. In the film’s opening minutes Camille is already in hospital after an eye-watering skating accident. Moments later we watch her attempt to skate her way home, despite evident pain caused from the stitches she’s just received. Her devotion to skateboarding eventually leads her to meet up with The Skate Kitchen, after admiring them from a distance via Instagram. Escaping a tense home life and relationship with her mother, Camille quickly finds herself drawn back to New York each day. The all-female group smoke weed, cause mischief and laugh endlessly together, their whole world framed by their shared passion for skateboarding. The camera captures their antics through romantic, golden-lit cinematography and places them against a killer urban soundtrack. Despite some questionable performances and characterisation, Skate Kitchen is glorious to look at; a celebration of modern New York women frolicking in the dusk of girlhood. For me, drama and reality don’t merge as seamlessly as I wanted them to and, with a solid documentary in her back catalogue, it’s hard to see why Moselle made the choice to bring fiction into the equation at all. Although the film’s spirit and portrayal of female skateboarding enraptured me, Skate Kitchen remained too much of a ditch attempt at capturing something authentic; done so well in 2014’s Heaven Knows What – a much more convincing hybrid from the Safdie Brothers. 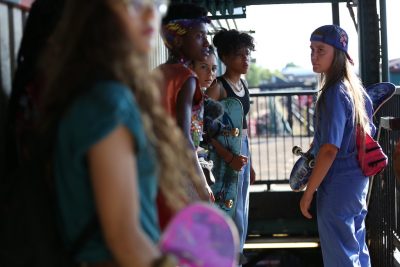 I wasn’t charmed by the film’s presumably spontaneous, improvised dialogue and I found a few pieces of dramatised script were delivered all too awkwardly. Outside of the skateboarding at the film’s centre it was very difficult to care about the fictitious relationship-based drama that surrounded it. Ex-boyfriends, narrow-minded parents and teenage angst are all just white noise encroaching on what the film actually captures much more powerfully; badass, progressive, refreshing female skateboarders. The group themselves seem desperately interesting and charismatic – at their most heroic when gliding down Manhattan streets, a mighty army looking mighty cool. I just wish that the film had followed in the footsteps of All This Panic as opposed to leaning more towards all this fiction. I wish that Moselle had had the confidence to show the girls as they truly are, fully authentic, without the distraction of layers of unconvincing drama. Throwing Jaden Smith into the mix was unnecessary and altogether a little baffling; although to his credit the prolific young star sinks quickly into the material of the film. The girls, as a community, are the beating heart of Skate Kitchen – the film, at its most glorious when the group are simply observed indulging in hazy conversation, coaching one another on ambitious board tricks or partying into the night. There’s a sense of community, safety and sensibility here – one unlikely to have been achieved with purely dramatic performances. The film does a wonderful job of capturing an undefinable time between adolescence and adulthood where young women prosper surrounded by other strong-minded women, all indulging in a life long sporty form of self-expression. 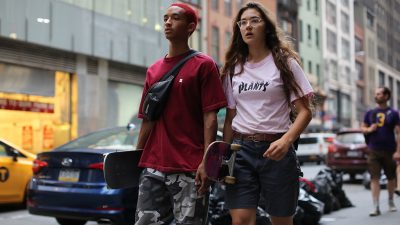