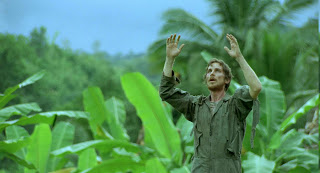 Werner Herzog’s Little Dieter Needs to Fly is quite possibly my favourite documentary. Venturing into the Vietnamese jungle, Herzog accompanies the war veteran Dieter Dengler who we witness re-living, physically and geographically, his experiences of torture, cruelty and imprisonment at the hands of the Vietcong. The film focuses on Dengler’s reactions to his memories and his personal courage and determination to survive his ordeal and return to safety. Nine years on from the documentary – and five years after Dengler’s death – Herzog returned to this story. Now, through mainstream Americanised movie-making, Herzog tells the story of Dengler once more in Rescue Dawn. Here, Dengler’s experiences are portrayed in a more fictional way. Rescue Dawn uses many traits of traditional war films to tell the story of Dengler with actors, a crew and a script. The story is modified and many elements of the Dengler’s journey are left out or twisted in order to achieve a more conventional cinematic and entertaining experience. This would perhaps seem like something worth criticising Herzog for but it does in fact make for great film entertainment. Rescue Dawn may be worlds apart from Little Dieter Needs to Fly in terms of style and purpose, but both maintain a core story and character that ignites both projects excellently.

Christian Bale gives an enthusiastic and typically intense performance as Dengler. There is a sense that Bale wanted to conquer this performance in order to truly understand the anguish that Dengler experienced. Despite the difficulty in viewing Bale as anything other than ‘a dedicated actor playing Dengler’, he approaches the character and the story with a respect that echoes through his performance. There is wildness in his eyes that Herzog himself is probably responsible for. Bale takes a valiant approach to his craft that is admirable; echoed in an equally courageous director. The most unexpected delight of Rescue Dawn is Steve Zahn. An actor most commonly associated with naff American comedy projects, Zahn reveals an entirely new and impressive level of acting ability in Rescue Dawn. Jeremy Davies also gives a wonderful performance. Both Zahn and Davies succeed in capturing the madness and pain experienced by prisoners of war. Bale succeeds in displaying Dengler’s stubborn attitude towards death and defeat. It is Dengler’s spirit that separates him from his fellow prisoners and this is delivered as clearly in Rescue Dawn as in the documentary that preceded it, despite the feature fiction film’s lack of background into Dengler’s character.

Filmed in the wild jungles of Thailand, there is a reality that festers in Rescue Dawn and enhances the audiences understanding of Dengler’s desperation. Bale famously ate real worms in one scene of the film – supposedly to emphasise the depths of hunger the real Dengler felt. It is this absolute disregard for a studio set and the use of props that makes Rescue Dawn feel and look so organic and realistic. The film, despite its disappointingly cheesy ending, is a fitting tribute to one man’s refusal to accept death as a conclusion to his time at the hands of war’s horrors. The ending is perhaps excusable as Dengler is not glorified once during the bulk of the narrative. His story is told simply as Herzog successfully delivers Dengler’s story to a more mainstream audience in a way that they will be able to process it. There are flaws in this feature, particularly in its closing minutes, but nevertheless Herzog manages to highlight what made Dieter Dengler such a staggering individual; his determination to remain alive when death seemed like the unavoidable next chapter.