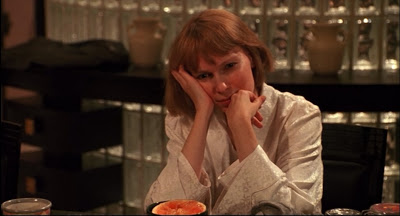 There is something indulgent about sitting down on a rainy weekend and enjoying a Woody Allen film you’ve never seen before. With a large mug of tea and a slice of buttered toast, I sat back to enjoy Allen’s fantasy/comic adventure Alice. A film that centres around re-evaluation, Alice tells the story of a woman of luxury, assessing her life choices and situation. Developing a sudden sense of self-worth, and an awareness of its importance, Alice begins to want more for herself than just manicures, shopping trips and stunning interior decoration. Her family, marriage and lifestyle seems idyllic until Alice takes a closer look at her contributions and everything she has given up to be the perfect New York housewife. When she seeks help for a sore back from a Chinese herbalist her life begins to undergo dramatic changes. Her self-confidence is heightened, she addresses deep rooted problems with her family and her marriage is placed directly under the microscope. Alice continues to take her ancient herbs which lead to comical events of self-discovery. Where so many Allen films distance its audience with wealthy characters that aren’t always easy to relate to, Alice demonstrates just how much more there is to life than exterior appearance and wealth. Focussing on self-confidence, social pressures and the turmoil of love and relationships, Alice is a heart-warming and highly amusing story of one woman’s pursuit to simply mean more. 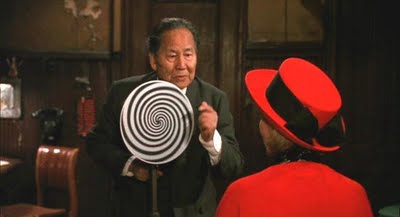 Despite my personal love of Diane Keaton in Allen’s comedies, nobody captures Woody’s female characters quite like Mia Farrow. She is the female embodiment of Allen from start to finish in Alice. Her ability as a comedic actress is balanced by her gift as a serious character actress. She succeeds in showing us every inch of Alice’s soul and psyche, whilst making us giggle along the way. Alice’s husband is played by the sensational William Hurt and Joe Mantegna is charming as Alice’s sudden love interest, Joe. As Blue Jasmine reconfirmed, Allen is somehow enables Alec Baldwin to lose all of his usual on-screen annoyance. This is demonstrated in his minor role in Alice, where he plays the ghost of Alice’s former boyfriend. Despite the tongue-in-cheek manner that Allen approaches this story with, the subject matter remains deadly serious. Alice reminded me of Allen’s earlier gem, The Purple Rose of Cairo; another film in which a woman, also played by Farrow, escapes a very dark situation in a sweet but surreal way. One of the things I admire most about Allen is how he invents women who are so often striving to better themselves and who tend to have a very clear grasp on who they are, their flaws and their strengths. Alice is yet another example of Woody Allen’s outstanding understanding of women and their ability to muster strength whilst struggling. Blue Jasmine also highlights that almost 25 years after Alice he still maintains this insight into the female race. Thank goodness we have actresses as talented as Blanchett to take over from the likes of Farrow because, for me, Farrow will always be missed from Allen’s work of the past twenty years.