In the penultimate film of the Marvel Cinematic Universe’s second phase we are reunited with our six avenging heroes – Hulk, Iron Man, Captain America, Hawkeye, Black Widow and Thor. Following on from plot lines set up in Avengers Assemble and each individual character’s solo movie sequels, Avengers: Age of Ultron sees the dynamic and dysfunctional group faced with a new type of threat. When artificial intelligence with a personal vendetta against Stark Industries thunders towards global destruction, it’s up to The Avengers to stop him as well as a set of Eastern European twins with their own reasons for destroying Stark. Once again, Iron Man is at the heart of everything with the rest of the team interjecting with sarcastic remarks that has become a common trait of director Joss Whedon. Avengers: Age of Ultron really isn’t as epically long as everyone else seems to think. It’s not short (wrapping up at just under two and a half hours), but it certainly isn’t the gargantuan thrill ride everyone else seems to think. Following on from the over-hyped but respected espionage delights of Captain America: The Winter Soldierand the charming space odyssey surprise of last summer that was Guardians of the Galaxy, Marvel’s sequel to Avengers Assemble was under some pressure to perform. Sadly, there isn’t much fun to be had here. This is a lazy re-imagining of everything that’s gone before. Besides the limp plot there’s not enough enjoyment or excitement. The story drags and meanders along, seemingly desperate to get to the film’s final forty minutes where attention turns to explosions, unnecessary slow-motion sequences and predictable, clichéd civilian-rescue missions. Meanwhile, Ultron is an adequate villain with a little bit too much sass. 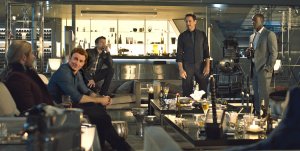 Avengers: Age of Ultron is by no means as tragic as Iron Man 3 – there’s some good stuff here, just not enough of it. Controversially, the romance between Black Widow and Hulk worked for me. This movie was always just going to be further set up for both Captain America: Civil War and Avengers: Infinity War (parts 1 and 2) but if anything, that was an excuse to have more thrilling fun with a bunch of adequately complicated characters. Chris Evans and Chris Hemsworth are, as always, the franchise’s highlights. Sadly they’re drowning in a sea of other comic book adaptations such as Paul Bettany’s poorly explored ‘The Vision’ and fan favourites Scarlet Witch and Quicksilver who are both barely brought to life by Elizabeth Olsen and Aaron Taylor-Johnson. Painfully bad Russian accents and weak CGI haunts my memories of Avengers: Age of Ultron which struggles greatly with its pacing due to its vast number of characters, none of whom get the screen time they deserve. Of course Iron Man is the one exception, with Robert Downey Jr continuing to milk the cash-cow in an array of badly fitting blazers and with his usual dry wit and arrogance which grows ever more tiresome. Bursting through the £200m box-office intake before even opening in America, Avengers: Age of Ultron is set to be as successful as the first instalment but lacks the same charm and intensity. Perhaps the novelty is just wearing off; revealing a slightly tired out formula just below the surface.