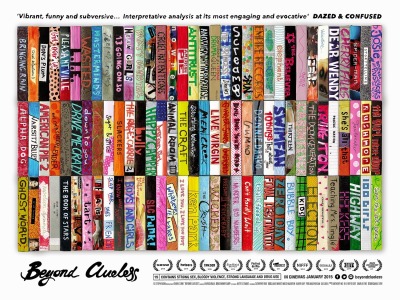 The high school experience is cemented in all of our minds. Whether you loved it or hated it, whether you were the bully, the bullied or the lucky few who slipped under the radar, we all remember it vividly. For most, high school was about the social experience rather than the academic.  It’s where puberty strikes and where sexuality is discovered. Since leaving secondary education we’re told repeatedly about the value of being an individual – an important message that the school system crushes. Merging with the herd is the priority between the ages of 11 and 16, (18 for any American readers), as the teenage world does not treat those who stand out kindly. Being different means taking a bold risk – a risk which could lead to either the glory of mass-envied popularity or the painful world of cruel labels that stick. Here in Britain we may not have cheerleaders and jocks but we still had twisted high school worlds which have their own rules and politics. Still, it is through American teen movies that we witnessed American high school culture with which we could identify. Charlie Lyne’s Beyond Clueless pays tribute to the high school experience whilst thoroughly unpacking and analysing it. By placing an unexpected variety of teen movies under his microscope, Charlie Lyne has created a video essay for a new generation.

Last year, the success of Mark Cousins’ The Story of Children and Film demonstrated that there is a place for the cinematic lecture within contemporary film culture; not just on television. Now Beyond Clueless is dissecting the likes of She’s All That, Drive Me Crazy and Mean Girls as well as lesser known or lesser respected titles such as Slap Her, She’s French! and Bubble Boy to create a fierce and complex summary of what these films say about the reality of the adolescent journey. What one expects to be a celebration of teen classics like The Breakfast Club, 10 Things I Hate About You and of course Clueless actually turns out to be a more varied commentary on the films that we experience in our teen years, despite their inferior substance. In an interview with the BFI Lyne claimed that “There is something really self-analytical about re-watching films you loved as a teenager and wondering what the hell you were thinking.” As a child of the nineties I relate to Lyne’s words and to the material and analysis found in his film. Don’t be put off by Beyond Clueless and its inclusion of the likes of Idle Hands and EuroTrip because it’s a film brave enough to try and prove that such films, however abysmal in content, shape us during adolescence and still reflect the youth of the period. A personal highlight would be the film’s reading of Jeepers Creepers as a story of homophobia, homo-eroticism and gay desire and denial.  Lyne’s hypnotic teen study opens with an analysis of witchcraft cult favourite The Craft featuring teen movie favourite Fairuza Balk who also narrates Beyond Clueless. A summary of the film’s messages about individuality, popularity and team mentality is a satisfying amuse-bouche that wets the appetite for the film’s upcoming chapters which work through the experience of high school, including fitting in, acting out and moving on.  Charlie Lyne’s critical endeavour into the world of teen-cinema is a refreshing take on educational film that feels delightfully all-inclusive, without weakening its academic backbone.

One thought on “Beyond Clueless.”