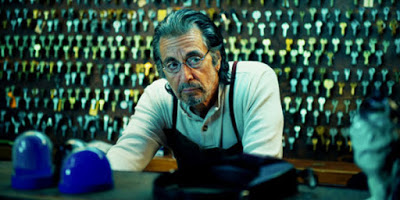 An unsettling study of one man’s loneliness, in the wake of his many mistakes, Manglehorn is the uncertain but occasionally gripping new Al Pacino movie. Director David Gordon Green doesn’t manage to maintain the tenacity or conviction he showed at last year’s Edinburgh Film Festival with Joe. Still, developing greatly from his Pineapple Express days, Green proves that he has an ability to experiment and playfully distort audience expectations of style and narrative development. Manglehorn, an ageing locksmith, who spends his down-time chatting to his sick cat or writing to his long lost love, has burnt many a bridge. His strained relationship with his son and his blunt, harsh words about his ex-wife hint to the errors that lie in his past. When in the company of his beloved granddaughter or his bank clerk (Holly Hunter) Manglehorn demonstrates redeeming qualities – hints that there is still hope for this twisted loner to find happiness in this world. Aware of his own flaws and past mistakes, Manglehorn goes about his life with a tragic understanding of his own devastating predicament. Manglehorn is about redemption and stubbornness. It’s a film about both self-acceptance and self-sabotage.

During the running time of Manglehorn, our protagonist doesn’t experience anything particularly unexpected. His cat gets sick, he argues with his distant son and chats with other lonely men over a big plate of pancakes. Manglehorn celebrates individuality in its darkest manifestations. Occasional slow-motion sequences and scenarios that unfold beneath neon lights and electronic scores are reminiscent of the work of Harmony Korine or Nicolas Winding Refn. Korine features in the film in an irritating minor role – a possible explanation for some of Manglehorn‘s more eccentric, trippy segments. Holly Hunter is an energetic and much needed expressive addition to the cast. Her character is the opposite of Manglehorn. Her heart is on her sleeve and her soul exposed. She both intrigues and scares Al Pacino’s lone wolf. Pacino gets into the depths of Manglehorn and only occasionally has a nibble on the scenery. It’s a tricky film to like and a harder film to fathom. There’s a lack of understanding as to what the film wants to be and this is a little too obvious to a viewer. I was charmed by the unusual transitions from clashing scenes; Manglehorn is made up of fragmented moments rather than smooth flowing story. It’s far too pretentious for its own good and the unlike-ability of the central character is not entirely off putting but at times grows tiresome. It feels longer than it actually is and that’s because it’s a tough film to enjoy. At times charming but ultimately a little empty and nonsensical, Manglehorn is a flat drone of a movie, occasional moments will delight and engage but on the whole I found myself growing ever more impatient with the latest from David Gordon Green. 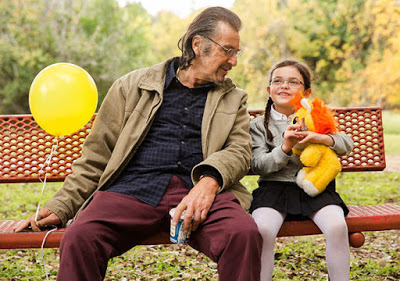