Heading towards an emotional but predictable segment in its final third, Drunk Stoned Brilliant Dead spends the rest of the time being either angry or mischievous. Anecdotes and recollections make up the film’s main narrative and add an expected charm and humour. Moving through the Lampoon’s history chronologically, with the occasional bump in the road – Douglas Tirola’s documentary is made with a fondness for its subject matter and told frankly; designed for fans of the Lampoon and not interested in converting anyone new. Familiar faces burst onto the screen but are soon gone and replaced by another ageing scoundrel of American comedy. Chevy Chase and Tony Hendra are particularly enjoyable to hear from. The film spends so much time exploring the history of the magazine that the closing chapters and their documentation of the Lampoon’s films and expansion seem rushed and under-sourced. Either more time should have been spent on the later years or none at all. One emotional story of death reveals tragedy and sorrow which is still evidently felt by certain members of the National Lampoon family – a moving sequence which stands out amongst the cloudy, intoxicating haze of humour that is the rest of the film. Other than this fragile movement, the film has no revelations or reveals that will linger in your mind. Still, I was charmed by the film’s portrayal of those involved in the creation, success and expansion of National Lampoon as a family in frenzy; simultaneously friends and foes living in a chaotic comedic time that could never have lasted. 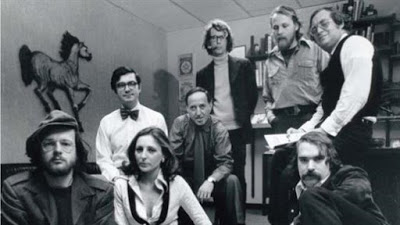