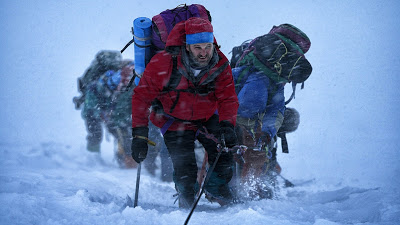 I saw Everest with my Grandmother, who proceeded to gasp and yelp at every climatic turn the film presented us with. Based on a true story, Everest is a visceral extravaganza which chills. Shot on Everest, in Italy and at Pinewood Studios – Everest benefits from the inclusion of the real, mountainous locations. The film has something of a physical effect upon one – which resulted in us all leaving the screening in need of a large cup of hot chocolate. My Grandmother spoke of how shattered the film had made her – “as though she herself had been up the mighty mountain”. Based on the 1996 Mount Everest disaster, Everest tells the story of Adventure Consultants and their 1996 expedition to take clients to the summit. An adventure company, Adventure Consultants attempt to get their customers to the top and bottom of Everest before their bodies shut down. This is the story of a particularly crowded year on the highest mountain on earth. Competing with other climbers and companies, the expedition attempt to reach the top, but disaster strikes when they find themselves caught in a viscous storm. When tragedy hits and the oxygen tanks start to run out, the group suddenly face a lethal race against time to retreat to base camp. A sturdy cast carry this slow-burning but reasonably compelling disaster movie from Icelandic director Baltasar Kormákur.

Jason Clarke guides us through the movie as Robin Hall, the leader of the historical exhibition. Emily Watson and Keira Knightley both carry the film, bringing us emotional intensity via their phone calls to the expedition from base-camp and home. Watson portrays fear and dread on her face – an actress who can tell a thousand truths without saying a word. Jake Gyllenhaal also makes a brief, understated appearance as a friendly rival and fellow climber. I was most impressed with the film’s discussions of the rules of the mountain. Adventure Consultants ultimately chauffeur amateur climbers up and down famous summits – holding the hands of tourists, to some degree. At one point Gyllenhaal’s character claims that he believes if you aren’t able to climb Everest yourself then you shouldn’t be on the mountain; providing food for thought amongst the dramatic twists and turns we witness on screen. Everest looks fantastic, brilliantly portraying the gruelling physical and mental challenges involved in such an expedition. Slightly over-stretched but admirable in all its technical feats, Everest takes its time getting to the top before crashing down like an avalanche, gushing with horror and intensity.

Thank for reading and let’s all keep supporting our beloved film industry.