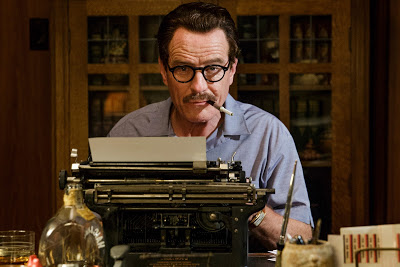 Since the film industry was heinously targeted in the 1950s by Joseph McCarthy and his communist witch hunts, it seems only natural that we would make films about it. The latest in this long line of Hollywood blacklist melodramas is Trumbo, directed by Jay Roach. Best known for bringing us the Austin Powers trilogy, Roach now demonstrates that he can balance both humour and the humane in a film which is driven by a stand out lead performance from Bryan Cranston and a heck of a lot of style. There’s style but also a whole lot of substance. Trumbo is the true story of Dalton Trumbo – Hollywood screenwriter, passionate communist, and an exclusive member of the Hollywood Ten (those blacklisted and put out of work by McCarthy in the 1950s). We first meet Trumbo on the set of Our Vines Have Tender Grapes, at the height of his career. What follows is the turmoil and tyranny experienced by him and his family as the witch hunts close in around them. Trumbo is a glorious and riotous tale of dignity, passion and genius. It’s bright and cheery but below the surface there is more vulnerability and sentiment than expected. Trumbo is in many ways a traditional biopic but it also delightfully explores the men and women that surround him as an individual and a writer. There is a twinkle in Cranston’s eye throughout which transcends into the rest of the film. Trumbo is witty, camp and nostalgic; a raucous celebration of sticking it to the man and adapting any situation to work to one’s advantage. It has great energy and a big heart, all placed under the strain of cigar smoke and large glasses of whisky. 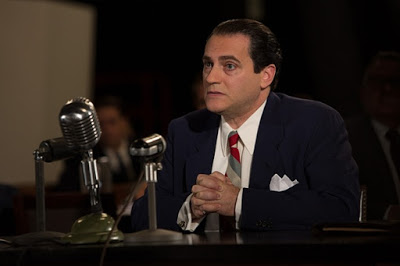 Trumbo is yet another triumph for Bryan Cranston, whose career continues to soar following its powerful revival in 2008. A bristly moustache disguises him slightly, forcing a lot of the performance into his eyes. Cranston captures the comedy and the confidence of Dalton Trumbo whilst in the film’s later chapters also bringing out his self-involvement and unhealthy attachment to his work. Louis C.K. gives a performance which is reminiscent of Zero Mostel’s in The Front and Michael Stuhlbarg brilliantly portrays the infamous Edward G. Robinson easing out a tragedy and a sadness that we haven’t seen before in this particular Hollywood legend. Trumbo, although biographical of one man, brings out the sadness and the sorrow of many – just as other McCarthy-based movies have also done. Trumbo is a story of a life, in which we watch Dalton’s moustache grow whiter. Yet, it is also a cautionary tale about the dangers of stifling opinion and limiting expression – be it political or artistic. The film’s rosy colour palette calls to mind the likes of Saving Mr Banks – which shares a similar wit and aesthetic; both brimming with visual nostalgia and satisfying references to Hollywood greats. Trumbo balances light-heartedness with the troubled souls whose stories it’s telling and the deeply concerning ill-treatment of those targeted by McCarthy. Held together by Cranston’s excellence, Trumbo is stylish, cool and devilishly charismatic. 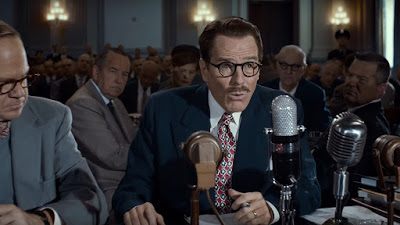 One response to “Trumbo.”