Based on the written work of Barry Crump and spawning from the mischievous mind of director Taika Waititi comes Hunt for the Wilderpeople – the tale of a troublesome foster kid and his somewhat reluctant foster-uncle. The unlikely duo find themselves on the run in the density of the New Zealand bush, chased by both the law and the dreaded child welfare services. The film unfolds in ten charming chapters as the manhunt intensifies and the stakes rise for young Ricky Baker and the grumpy Hec. Waititi’s work is distinctive – something of a combination between Wes Anderson and Richard Ayoade. He is currently working on one of the upcoming Marvel Cinematic Universe instalments, Thor: Ragnarok, after springing into the limelight in 2014 with his masterful mockumentary What We Do in the Shadows. Hunt for the Wilderpeople confirms fan confidence in Waititi who will no doubt bring distinctive style to the Disney-owned comic book franchise as we saw the likes of James Gunn do with Guardians of the Galaxy. Back to the film at hand, Hunt for the Wilderpeople, for what it is, seems to be a near-perfect movie. The humour is relentless and consistent with an emotional core and complex characters who it is a joy to watch develop and grow. Everything is carried by veteran actor Sam Neill and a powerhouse performance from 13-year-old Julian Dennison as troubled wannabe gangster, Ricky Baker. A film rooted in the stunning nature of its native home, this is an unexpected gem of 2016. 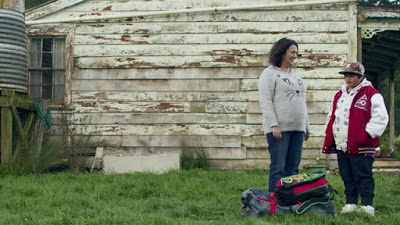 Dennison’s charisma is a wonderful thing. His face is striking and charming and something I could watch all day. The film opens as Ricky arrives at the isolated farm which he must now learn to call home. He steps from the car in pristine white trainers in unimpressed silence. Throughout the rest of the film we see him robed in a variety of decorative, over-sized hoodies which he wears with pride like a modern cape – almost regal in his bizarre appearance. Hec is the antithesis of Ricky, sporting thick knitwear and wild facial hair. The city meets the outback as their two cultures collide – coming head to head and rubbing uncomfortably up against one another. Of course, for the audience this is deeply satisfying to watch. Amidst the comedy and quirks, there are sombre moments of brutal truth about abandonment and the foster care system. Such moments break away from the humour and provide depth and reflection. Several superbly structured action scenes and gory moments of violence further demonstrate Waititi’s versatility and craftsmanship. The natural landscape of New Zealand provides a rich textured backdrop for the chaos that ensues. Not since Peter Jackson’s Lord of the Rings Trilogy have I seen New Zealand so stunningly displayed in cinema; making one of the film’s jokes even more hilarious upon reflection. Hunt for the Wilderpeople is a complete one of a kind – a joyous cinematic treat whose unconventional protagonists remain with you long after the lights have gone up.