With nuclear war feeling more of a potential imminent reality than ever before, we can welcome a new Godzilla film with open arms. Since the creature’s iconic debut back in 1954, our monstrous protagonist has taken many different forms – partly because of the changing technological abilities of cinema but also as a result of being dragged across the oceans and adapted for Western audiences. It’s been three years since Gareth Edwards’ innovative and highly under-appreciated adaptation of the beast, a film that split audiences and fans but ultimately helped to ease the painful memories of Roland Emmerich’s diabolical, commercialised, popcorn-devouring, limp interpretation back in 1998. Now, returned to the care and safe hands of Japanese filmmakers, Godzilla emerges once again in a dialogue-heavy but oddly brilliant re-telling. Shin Godzilla is much more of a damage control movie than it is a disaster movie. Having fed on nuclear waste unknowingly dumped in Japan’s oceans by the USA, a prehistoric lizard has learnt to not only ingest the toxic waste, but become immune to it and ultimately survive by living off of it. The film starts with chaos already underway as government officials gather in dusty boardrooms to fathom the causes of what appears to be a natural disaster. Almost instantly presented with evidence of the monster behind the mayhem, different governmental bodies turn to each other to shift responsibility back and forth. Don’t expect to see that much more of the gigantic creature than the 2014 version provided but instead look forward to a cynical depiction of corporate meetings and red tape which stalls progress more than it solves the problems at hand.

Visually, there is so much going on in Shin Godzilla to unpick and admire and an equal amount to bewilder and confuse. There are as many aesthetically pleasing choices are there are bad calls of visual judgement but everything is hand-stitched together rather lovingly all the same. This ultimately creates an unexpected versatile movie, which feels modern whilst also harking back to an abundance of films I loved as a child. Shin Godzilla is one minute like Michael Bay’s Transformers before suddenly morphing to reflect the great work of Ray Harryhausen. Shin Godzilla is equal parts The Host and Thunderbirds. It’s Jaws and then Sharknado – somehow all at once. The film’s score also reflects this absurd abundance of genres with operatic sequences moving into guitar riff heavy metal moments and then into the rich, nostalgic sounds of the original 1950s monster movie. Thick with dialogue, the film successfully provides us with many characters that help to create the film’s chaotic sense of humanity’s lack of control. Company jargon, lazy delegating and unnecessary management structures are all shamed in this humorous tale of monster vs. man – in this instance, the man is short for manager. The vast dialogue is a challenge when trying to simultaneously process the film’s subtitles and imagery but for those patient enough to sit through two hours of cinematic government strategy, there will be rewards in the form of several mighty, mesmerising monstrous moments. 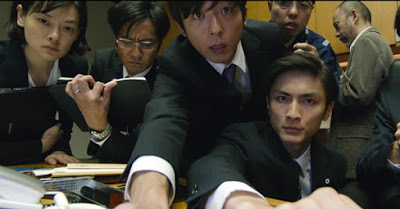