Michael Fassbender’s Harry Hole is something of a mosaic of all the cliched film noir detectives that cinema has constructed and brought to our screens in the last century. Isolated by his alcoholism, he longs for a new case he can sink his teeth into; to distract him from his lost love and lonely existence. He’s a flawed and tortured individual but, god damn it, he’s the best detective the city of Oslo has ever seen. A series of grisly murders leads him on the hunt for a ruthless killer who targets women and leaves snowmen at the scenes of his crimes. Accompanied by an enthusiastic new colleague, and taunted by the killer, Hole must uncover the one responsible before it’s too late, or before the audience are well and truly numb with boredom. When it comes to gory films set in the snow, The Snowman lacks all the beauty and genius of a classic like Fargo and the sharp storytelling of recent independent hit Wind River. Perhaps the film should have been more appropriately entitled The White Man to reflect its entirely pale, stale cast – with not even one person of colour in any minor role. I do my best to stay away from reviewing films this lacking in diversity but feel it’s also important to hold up certain films such as The Snowman as an example of exactly the type of film we don’t need more of. Considering the vast amount of talent both on screen and behind the camera of The Snowman it’s baffling just how uninspired, confused and lacking in confidence the final film is. 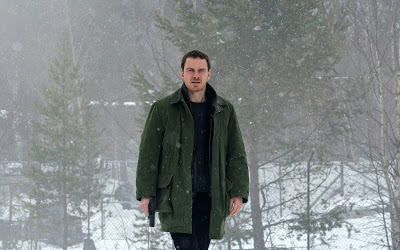 On screen there is the likes of Michael Fassbender, J.K. Simmons, Toby Jones and Charlotte Gainsbourg doing what they can with a plot so clunky it’s the audible equivalent of a toddler stomping around having a tantrum in Doc Martins on creaky wooden floorboards. Fassbender is right at home as Hole but fails to bring any of his usual energy to the limited character. Even Gainsbourg struggles with the film’s restricted vision but together both actors have wonderful chemistry as friendly and amicable exes. Meanwhile J.K. Simmons and Toby Jones are criminally underused. A film like this from lesser known talent might have passed for forgettable weekend multiplex entertainment but with the likes of Martin Scorsese and Thelma Schoonmaker on board, the bar is naturally raised. Where Scorsese seems to be making a habit of lending himself as executive producer on numerous underwhelming productions, Schoonmaker’s input is far more nonsensical. Inexplicably The Snowman seems to be one of the most poorly edited films of the year from perhaps the greatest living editor. Adding to the mystery is the fact that director Tomas Alfredson, who demonstrated pure vision and control with Let the Right One In and Tinker, Tailor, Soldier, Spy, could ultimately be responsible for such inconsistent, cinematic messiness. I don’t hate The Snowman, it’s neither bad enough to love or hate. Like a frustrated parent of an unruly child, I’m not angry with it, I’m just very disappointed. In a nutshell, this is a film made by a collective who should have known better. The Snowman evidently escaped the creative clutches of its makers with too many intertwining stories that are clumsily forced together.

One response to “The Snowman.”