The hunger for Lady Bird was evident in the vast appetite of the London audiences queueing at the British Film Institute on its opening weekend. I’m rarely in London, so I relished the opportunity to see the film at one of my favourite venues in the capital. I got myself a ticket forty-five minutes before the screening, just before it sold out. An awards season favourite, Lady Bird is the autobiographical directorial debut from millennial indie-cinema star Greta Gerwig. As an actress, she has always been most comfortable and delightful in roles she herself has written. Here, as director, everything is hers to command. Saoirse Ronan is Lady Bird, a self-titled teen who at seventeen, remains constantly locked in a contentious argument with her loving but overbearing mother. Friendships, family, impending fornication and the potential freedom of her future constitute Lady Bird’s current existence. Surrounded by classmates far more privileged than her, she sets about pursuing her place in the world as her rigid catholic school education draws to a close. Both the intense love and infuriation between mother and daughter is deeply relatable for anyone who’s gone through a domestic rebellion, amidst the claustrophobia of parents who remain attentive and invested in their children’s development. This type of conflict is a real privilege, although, this is never recognisable or appreciated at the time. Gerwig’s sensitive and humorous handling of the film is evidently driven by personal experience but the result is universally familiar. Lady Bird is a devoted love letter to the struggling teenage dreamer in all of us. 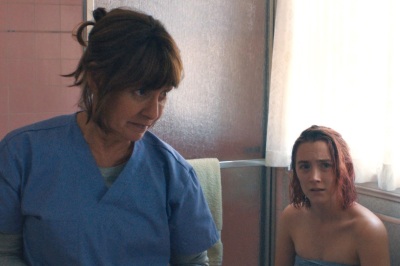 Ronan’s performance commands our full attention and she rises to the challenge with guts and grace. Laurie Metcalf isn’t afraid to show the ugly side of parental love as a mother constantly exasperated by double shifts, financial concerns and her daughters untidy bedroom. Both actors are nominated for next month’s Academy Awards for their brash, fiery performances in which their characters’ feud bubbles down to differing visions for Lady Bird’s future. The striking duo are complemented by charming turns from Hollywood’s hottest male newcomers, Lucas Hedges and Timothée Chalamet and a compassionate, sorrowful contribution from Tracy Letts. Lady Bird shoots from the hip; a constant stream of blunt wit and painful truths. Beautifully shot and framed, the film’s sporadic narrative reflects the spontaneity and chaos of those angsty years spent on the cusp of womanhood. Where most of us would like to erase and forget our behaviour and personas from this particularly cringe-worthy period of life, Gerwig unapologetically shines a light on them, laughing at both the predicaments and the passion of the era. After all, it’s 2002 and her best friend’s main concern when Lady Bird defiantly announces her plans to study in New York is “what about terrorism?”. The Iraq War and America’s hyper-anxiety about their safety form the backdrop and cultural zeitgeist of the film. Whilst the rest of the world is gripped by eighties nostalgia, Gerwig has created a detailed, hilarious time-capsule for Generation Y, something that until now seemed too embarrassingly recent to laugh about or reflect upon. Lady Bird is a tender and deeply sensitive piece of filmmaking, caked in a thick layer of fierce humour and uncomfortable truths – an altogether elating and emotive cinematic experience. 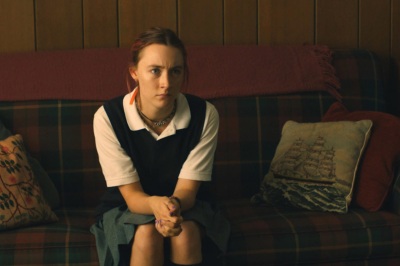