2018 has been a rather disappointing year for my personal cinema expeditions. With the exception of The Shape of Water, award season was a collection of deflated disappointments with the likes of Lady Bird, Three Billboards and I, Tonya all leaving me a little let down in their mere adequacy. The most unexpected treats of the year came in the form of under-sung sinister gems such as My Friend Dahmer and The Little Stranger – equally haunting character studies, both adapted from very different literary sources. Energetic marvels BPM (Beats Per Minute) and Blindspotting both captivated me with their balance of vibrant joy and traumatic underbellies. The blockbuster stunner of the year was no doubt Bradley Cooper’s passion project and beautifully crafted revision of A Star in Born which finally brought the pure creative talents of Lady Gaga to the big screen. Meanwhile the runaway animated hit of the year was Spider-Man: Into the Spider-Verse – an explosive visual tapestry which embraced a collaboration of artistic styles and a playful narrative. A surprise true story inspired shocker, American Animals boldly played with the conventions of the heist genre, merging them intelligently with documentary to create a smart hybrid thriller. Documentaries have remained perhaps the most varied and challenging genre this year with two directorial debuts stealing the show. Bing Liu’s emotional debut Minding the Gap captured and challenged toxic masculinity through a group of skaters. Meanwhile Bernadett Tuza-Ritter’s astonishing access to modern day slavery uncovered abuse and injustice in A Woman Captured, making it this year’s most harrowing viewing experience. 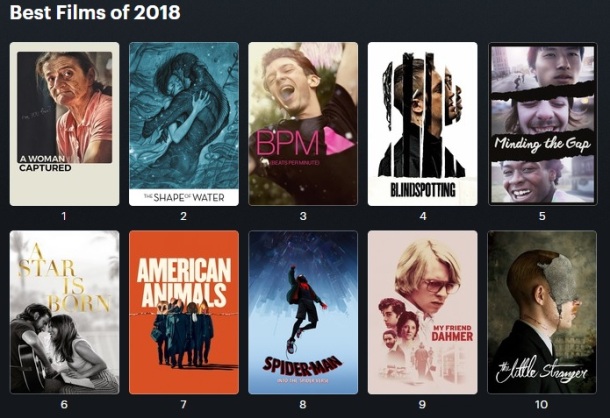 Many documentaries didn’t quite make it into the top ten, including Sean McAllister’s eye-opening A Northern Soul, Sandi Tan’s meditative love letter to cinema, Shirkers and Kevin McDonald’s tender star study Whitney. Meanwhile, fictional close contenders included the brilliantly bizarre A Simple Favour, the underrated Tully and Lynne Ramsay’s potent You Were Never Really Here. It’s been a year of misfits, missed opportunities and misunderstood masterpieces. 2018 has been a bit of an oddball year, perhaps a slight dip in quality where style has been prioritised over substance. Nevertheless, some remarkable pieces of cinema have stood out, all rich in originality and authenticity. Representation on screen continues to gradually improve (albeit, far too slowly) and the results of which are visible in my top ten films of the year. Whilst white, heterosexual and male stories continuing to vastly dominate cinema, some vital LGBTQ+, ethnic minority and female stories and experiences are visible – vitally represented to ensure all audiences are reflected in the films we watch. I’m looking forward to seeing many more of them next year.

Happy New Year, thanks for reading and let’s all keep supporting our beloved film industry.