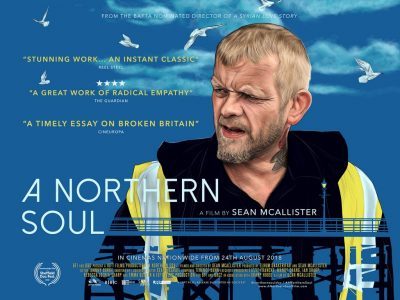 Sean McAllister returned to his hometown of Hull in 2017 after being appointed Creative Director of City of Culture. Residing back with his parents after years spent all over the world making award winning documentaries, McAllister now faced a new kind of challenge. Over the course of the year McAllister would attempt to engage his city with a year long cultural programme and proudly put Hull on the UK’s cultural map. During his residency, Sean got to know, and began to film, local resident Steve Arnott. Steve – a warehouse worker – had a unique dream and a fierce determination to bring innovative music workshops to local schools and youth groups in the form of a touring hip-hop studio entitled the ‘Beats Bus’. They began by documenting Steve’s attempts to bring his dream to fruition. Yet, the turbulent events taking place in Steve’s life quickly began to take centre stage. Overwhelming debt, limited time with his beloved daughter and injustice at work – Steve’s story is one of many. The results of Arnott and McAllister’s collaboration is A Northern Soul; simultaneously a love letter to their city and a bleak sign of the times. The film premiered at Sheffield Doc/Fest in June and has gone on to tour across the country, engaging audiences emotionally, politically and socially. On the surface its an underdog story, at its heart it uncovers a horrifying broken system where social status, privilege and childhood impacts more on one’s livelihood than work ethic, morality and kindness.

Sean and Steve are very much partners in this project, with Sean often heard engaging and conversing with Steve on screen. It’s a masterclass in documenting a subject, earning trust and telling an authentic story. In many ways A Northern Soul has many elements of the zero to hero arc; a valiant protagonist, overwhelming obstacles and a relentless bravery. Yet McAllister goes further by sensitively revealing just how vulnerable Steve (and countless others in similar circumstances) can be. Steve’s central story is occasionally interrupted by sprinkles of humour from McAllister through touching interactions with his aging parents and the national climate that surrounds them. Equal parts tender and angry, A Northern Soul is a time capsule of Britain at a historical tipping point and the individuals most exposed to any changes in politics, economics and human rights. Don’t be mistaken; A Northern Soul is far from gloomy. It’s packed with emotion but also a sincerity that uplifts and consumes. Having had the pleasure to be briefly involved in the film’s recent tour of the country, I was honoured to witness how directly this film is changing lives. Huge segments of the film are dedicated to the charismatic youngsters that are undergoing Steve’s valuable mentorship. This only makes it more infuriating that the film was harshly brandished with a 15 rating for its use of strong language, instantly limiting younger audiences from seeing a film which contains young people at its centre. Local councils continue to overrule this certification, adding yet another touching human element to A Northern Soul and its ongoing journey outside of the cinema. A satisfying antidote to the tidal-wave of exploitative, stereotype-rich, ‘poverty porn’ that pollutes our televisions, A Northern Soul is good for the soul. Both a strong demonstration of cinematic integrity and a celebration of authenticity, comradery and resilience, A Northern Soul is documentary at its most powerful and potent.

One thought on “Documentaries Changing the World: A Northern Soul”