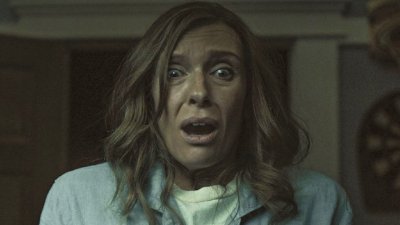 Following the death of her estranged mother, Toni Collette’s Annie secretly attends grievance support groups, where she describes her mother as manipulative, secretive and barely her mother by the end. Despite the distance and bad blood between them, Annie and her family quickly find the death of their matriarch starts to unravel the family dynamics and their lives as they know it. The absence of their Grandmother causes siblings Charlie and Peter’s strained relationship with their mother to intensify – their idyllic family home filled with unspoken resentments and internal tensions. Hereditary is a complex and confident feature debut from director Ari Aster who uses grief and loss as the core source of all horror in a film inspired by the greats such as Rosemary’s Baby and The Innocents. Despite eventually descending into its more conventional closing chapters, Hereditary is this year’s most engaging horror film yet. The film is carried by Collette’s chilling and intense performance – a petrified fear delivered through her contorted facial expressions, reminiscent of Shelley Duvall’s iconic performance in The Shining. Reasonable new-comer Alex Wolff and first-timer Milly Shapiro rise to meet Collette’s performance of monstrous motherhood as siblings with their own anxieties and turbulent maternal relationships. Hereditary – although falling short in its latter half – avoids many early opportunities to stray into the cliche, with a creepy dollhouse, creaky wooden floors and dark family secrets. Its energetic editing and use of both sound and silence makes it as chilling as it is carefully choreographed. Hereditary is expertly handled and has many a surprise in store for even the most knowledgeable veterans of the genre.

Annie is an artistic architect, specialising in miniature worlds, most often her own. She seems to use her work as a distraction from the death of her mother and yet her mother and her sorrow is evident in all she creates. As with so many good horror films, the family home becomes a prison containing and encasing all of the family’s horror. What was once a space of refuge and comfort, becomes a torturous chamber for the family in their grief, where memories of family members lurk in shadowy corners and mysterious words become etched into the wallpaper. At its core, Hereditary is evidently about control and chaos and the role both play in the life of Annie and her family. The film’s sound design is integral to the story and is responsible for many of the film’s most terrifying moments. Aster isn’t afraid to experiment visually, making some interesting editorial choices and, in particular, using lingering close ups to create a more intense and individual experience. Visually, the film is is actually surprisingly delicate, prioritising smart cinematography over conventional scare techniques. Sadly, the film deflates in a final segment which loses its narrative strength and strays a little too far into its own madness. The script is inconsistent with a few really powerful monologue moments let down by more cliched exposition further down the line. It’s certainly no It Follows or Get Out, but Hereditary looks set to be the horror film of the year thanks to a remarkable turn from Toni Collette and bold directorial debuting decisions. 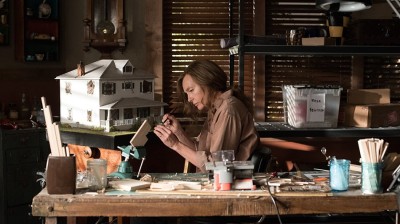