Infamous for the intensity his film’s exude, Peter Strickland returns with In Fabric – following his critically acclaimed Dukes of Burgundy and Berberian Sound Studio. Though different in subject, all of his films overflow with an evident love of cinema, with Strickland having proved himself a master of bringing together the technical elements that make his films so memorable and captivating. In Fabric takes this to a new horrifying level in his enriched tale of an evil dress which brings misery to the lives of all who wear it. Several different characters come into contact with the scarlet garment which originates from a high-end department store, evidently run by a coven of eerie sales assistants. The dress’ first victim is a single mother trying to reclaim her identity, looking for love in the newspaper personals columns. Soon it falls into the hands of a couple, soon to be wed, who experience the garment’s catastrophic consequences. Overseeing all of the misery the dress creates, is the store’s creepy owner and the coven’s lead witch. Although the film has strong European horror influence, the characters keep the whole affair feeling quintessentially British. The comical combination of Julian Barratt and Steve Oram as bank managers Stash and Clive brings a hilarious obsurdity to the film, brief relief from the operatic nightmare of the central story.

A rich canvas of colours give the film a timelessness, and like so many great horror films of recent years (such as It Follows), it’s impossible to place In Fabric in a specific time period. Deep reds fill the screen, from strong lipsticks to lacquered nails, to gushing blood to the garment itself. Meanwhile the characters speak with a purposeful woodenness; reminiscent of The Love Witch – another recent horror outing that took place in an identifiable time and culture. The silliness of Barratt and Oram, the stilted delivery of the story’s victims and the atmospheric nature of the department-store itself doesn’t seem as if it should work as a whole but with Strickland’s cinephilic handywork, it merges beautifully – creating a stirring, unpredictable ghost story. In Fabric is inspired by European horror history but is firmly rooted in the now, demonstrating the potential of visionary horror cinema. I’m so excited to see ambition within horror. In Fabric left me with the same joy I experienced whilst watching Jordan Peele’s Us just a few months ago. Key to the film’s celebration of eurotrash and its tribute to Giallo, is the stand out performance from Fatma Mohamed who is equal parts hilarious, camp and horrifying. It’s proving to be a golden time for horror cinema with the genre demonstrating range, versatility and originality more often than perhaps any other category of film. In Fabric, just like Us or The Love Witch is an ambitious and bold celebration of cinema, made by someone with a deep love and respect for its genre and someone fully aware of horror’s vast potential and possibilities. 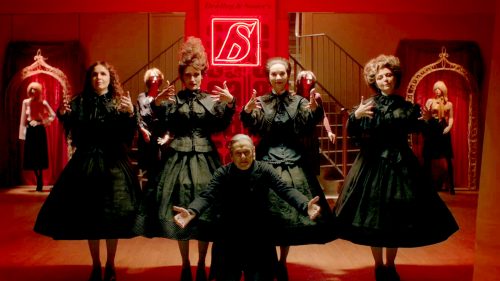