Elvis, A Gig & A Ghost: The Dodge Brothers – A Review.

As the 19th Bradford Film Festival comes to a close, it is time to reflect on certain highlights. Amongst the films, Q&As, talks and events there were certain contributions that provided those attending the festival with a sense of fun and energy. Prior to the festival, I was excited at the prospect of watching The Dodge Brothers again. The four piece skiffle/rockabilly group, accompanied by pianist Neil Brand, were present at last years festival, performing musical accompaniment for the silent film Beggars of Life. This year they returned to supply the music for the Soviet silent film The Ghosts that Never Returns,bringing the festival to a glorious close. The Dodge Brothers, made up of Aly Hirji, Mike Hammond, Alex Hammond and film critic Mark Kermode, contributed more to the festival than just the one performance. Unbeknown to me before the festival, I would actually be fortunate enough to witness the band at three different events over the festival’s final weekend. Along with their involvement with the silent cinema screening, The Dodge Brothers were also there to introduce and present a documentary about Elvis Presley, before performing at the end of festival party in the National Media Museum’s bar. 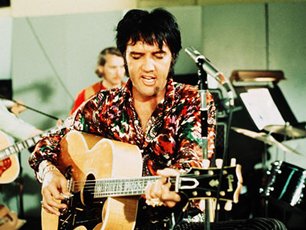 Elvis: The Way it Is turned out to be a fascinating insight into Elvis as a performer, a star and, more importantly, a musician. The film documents several of his ‘return concerts’ following his break from music in order to become a successful film star in the 1960s. I was intrigued by Presley’s nerves and self doubt that were still present years into his stardom. His passion for the music he made and the performances that he gave was expressed through the footage of the rehearsals with his band. Personally, I know very little about Elvis. Other than repeatedly watching the abysmal Tickle Me on VHS during my childhood, I have little knowledge of his music or his films. Therefore, I was thoroughly surprised to find my foot tapping through the whole ninety minutes and my facial muscles aching from the goofy grin that was plastered across my face – I also thoroughly enjoyed Presley’s vast number of paisley patterned shirts. The film was shown in its digital version after the celluloid copy that had been found turned out to be too poor in quality to project to an audience. The Dodge Brothers discussed what this represented before the film was screened and Mark Kermode put it perfectly when he claimed “the future is digital, the past is celluloid, the present is the two hand in hand.” The group discussed the film and their upcoming involvement in the festival briefly, introducing the screening perfectly and precisely. Only an hour after the screening the band took to the stage to provide the energetic entertainment at the festival’s closing party. The band were humorous and created an exciting and joyful atmosphere that carried on into the night. The musicians interacted with all those watching and provided us with great music, comical conversation and an overall feeling of celebration.

Returning the following day to perform alongside The Ghost that Never Returns, The Dodge Brothers were once again on top form. Their impressive improvisation added to the rich emotive message of the film and heightened the whole experience. The film itself was a tense and energetic tale of injustice and betrayal. The intelligent direction from Abram Room added to the sincerity of the story. Freedom, loss, love and death were just some of the many themes that made this story of desperation and strife so captivating. Having The Dodge Brothers at the festival was not only enjoyable but also important. Not only did they entertain, amuse and enchant audiences but they were also there as a reminder of how important music is to cinema. The collaboration of sound and screen is something we often overlook. The Dodge Brothers’ return to the festival managed to emphasise the important role that music plays to film, as well as giving some slick and superb performances for all to enjoy. I’ll be keeping my fingers crossed that they will return to grace the 20th Bradford Film Festival with their wit, their warmth and their sweet, sweet sounds.
Thanks for reading and let’s all keep supporting our beloved film industry.