“One touch of nature makes the whole world kin”

When I occasionally have the privilege of watching independent films made by aspiring film directors, I am reminded of the beauty and addiction of cinema. Despite my personal disinterest and inability to make my own films, I am amazed at the dedication, commitment and conviction that film makers bring to their work, especially when it is an independent piece that is aimed at the festival circuits. I was delighted to be asked to review Alex Masterton’s third short film, Paddy’s Paradise as it gave me the opportunity to indulge in the obsessive nature of film and share in the passionate and refreshing work of this exciting director. Paddy’s Paradise tells the story of one homeless man’s separation from society and his agony over lost love. Paddy, misunderstood, lonely and desperate, makes his home inside a telephone box…waiting for one particular, important call. In the eleven minutes that we are with Paddy, we learn a lot and question a lot. It is rare for a piece of work to move you in such a brief amount of time.

A budget of £2,000 meant that the kindness of volunteers and supporters was largely responsible for creating the final piece. Director Alex Masterton told me that the film was “only achievable with a lot of in-kind support, especially from Executive Producer, Georgia Low, whose financial aid and love, helped the film to become a reality.” Alex Masterton also told me that despite the stressful stages of production that the whole experience had been rewarding and that he was pleased with the end result and feels that “the film captures the essence of the loneliness and pain of being homeless“. This appears to be a highly personal project for Masterton, who not only directed Paddy’s Paradise but produced and wrote the story. Here Alex elegantly explains his personal attachment to the project:

“After my homeless friend, Patrick Carr, passed away in 2011, I felt compelled to make ‘Paddy’s Paradise’ as a tribute to his memory and to raise awareness of the plight of suffering homelessness. I also wanted to address the theme of how some people cannot cope with the loss of a loved one.“ 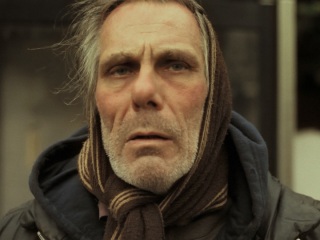 Our director allows the characters and their situations to speak for themselves. Simplistic camera styles and static shots allow Paddy to tell his own story without the audience feeling manipulated. It is as though the director trusts his audience to make up their own minds about this tale and take from it what they will, without impressing upon them. A stunning opening motif frames the rest of the film and eases the audience into a painful story. Imagination and reality cross paths and become entangled as we follow one man through hopelessness and frustration.Short bursts of dialogue contrast well with some artistic shots, highlighting the importance of nature to human kind. There is a certain amount of spiritual imagery rearing its head here but it is subtle and gentle. Paddy’s Paradise demonstrates the importance of story and character to contemporary cinema and highlights the timelessness of good structure and style. This is an impressive and exciting piece of work by a director that I hope to see a lot more from in upcoming years. Find out more about the film on its website here.