I’ve allowed myself over a fortnight to digest George Miller’s re-invisioning of his original dystopian franchise. Time away from Mad Max: Fury Road has proved as crucial to my criticism as time spent with it. Nobody will forget their experience of watching Mad Max: Fury Road for the first time; mine having been slightly tainted by the light brown smudge that spread across the top left corner of one of the Empire Wigan’s largest screens – proving an occasional distraction from what was being projected onto it. From start to finish, Mad Max: Fury Road thunders towards you; a dusty, suffocating tyrant intent on pulling you into its relentless action. We first meet Max as he runs from the war boys, the devoted followers of a leader whose power comes from his choice to withhold and control the water supply. A captive, Max soon finds himself caught up in a dangerous escape attempt by the dictator’s many wives – or “breeders” – lead by a dismembered, Ellen-Ripley-esque tank driver who’s determined to seek refuge in “the green place”. With the assistance of Max, the refugees must drive fast, aim straight and hold on tight in this, their wild fight for freedom. Filmed largely in Africa and set in a baking hot future, where water and gasoline are precious, Mad Max: Fury Road blows all elements of the Hollywood formula apart. A leading man who takes a silent back seat and a car chase that turns out to be the plot and not just a sequence make this a film to celebrate. Its steam-punk exterior reminded me of Caro and Jeunet’s The City of Lost Children. 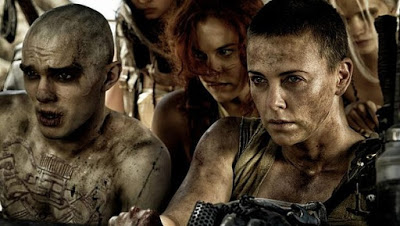 It makes very little sense that Mad Max: Fury Road was made the way it was and it’s both a relief and a revelation that Miller maintained as much creative control and integrity as he did. The most inventive, ambitious and unexpected Blockbuster of recent years has arrived in explosive form and is astonishing audiences globally. As disheartening as it is to have to be the voice of negativity amongst what has otherwise been a unanimously positive reception for the film, I can’t seem to look past the flaws that fester in this undoubtedly respectable modern cinematic feat. Along with the irritating smudge on the screen, the occassional 3-D designed shot distracted terribly from the otherwise highly visceral experience of watching Mad Max: Fury Road. Like so many films shot in 2-D, there is an uncomfortable transition into 3-D being made here. I saw the film in 2-D but still found certain shots designed for the 3-D audiences damaging my experience. Isn’t it ironic that the most multi-dimensional film of recent times is flattened by its desperate attempt to meet the needs of a moronic, tinted-glasses wearing audience? Miller’s impressively limited use of CGI only makes the rare moments its used even more obvious and out of sync with the mechanical beauty of the overall aesthetic. The feminist messages I picked up on are slightly confused and contradicted by certain sequences but it remains a movie wholeheartedly for and about women. The design of this post-apocalyptic world is at risk of dating considerably quickly but only time will tell – I hope I am proved wrong on this one. A sentence I never dreamed I’d say: Tom Hardy is the worst thing about this movie. A disastrous casting blunder in which the actor recycles Bane-like mannerisms and a variety of accents, is only mildly salvaged by Charlize Theron’s raw perfection. Still, I applaud Mad Max: Fury Road, despite my many problems with it. It’s one hundred times better than Avengers: Age of Ultron and was one thousand times more unexpected. Nothing beats a great road movie and nothing is better than seeing an underdog triumph. This is troubled but victorious, organised insanity where you can smell the petrol and the sweat for miles around. 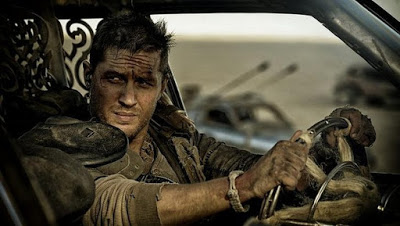