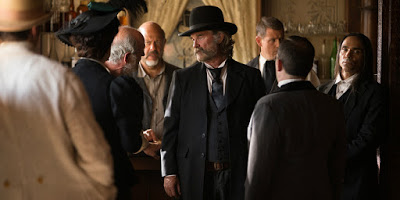 S. Craig Zahler bursts onto the scene with his directorial début, Bone Tomahawk. Set in the old West, and centring around a rescue mission, lead by a determined and loyal Sheriff, this is a world of dust, blood and ego. When two citizens are kidnapped by a mysterious and threatening tribe, a devoted husband, an arrogant bachelor and a loyal deputy join their Sheriff in a gruelling journey to try to rescue the unfortunate victims whose fate is sure to be a dismal one if the men fail to reach them in time. Zahler, who wrote, directed and composed the film and its soundtrack, has left a bold stamp here. It is well written, full of promise and good ideas and carried by two outstanding performances from Kurt Russell and the always sublime Richard Jenkins. A strong beginning slides gradually downhill in a film of three segments. Bone Tomahawk is a promising first feature for Zahler but its flaws are hard to ignore. Atmosphere and character bubble up in the opening forty minutes; suspense, dread and wit already present. The pace decreases as the men venture out on their quest but there is still enough grit, violence and masculine crisis to keep us engaged. In its closing third, Bone Tomahawk turns its back on the path it’s blazed thus far as Zahler gorges on gore in ridiculous abundance. The horror nightmare and the stern western meet but never intertwine, making for a clumsy jump between two chapters and genres as the film draws to a deflating close. 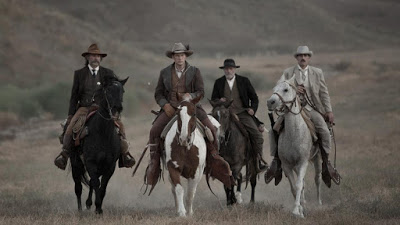 The film’s performances are varied. Patrick Wilson is typically cringe-worthy and flat, continuing to baffle me as to how he scored the gig. His captured wife is played well by Lili Simmons but she isn’t given nearly enough screen time or depth of character. David Arquette and Matthew Fox are both surprisingly well suited to the genre and perform with unexpected vigour. Kurt Russell is more mountain than man in a sturdy, satisfying portrayal of our sheriff who embodies a noble presence and righteousness that oddly reminded me of Gregory Peck’s Atticus Finch. Russell parades around in glorious head wear and rides a horse with true class; a vital singular element that almost makes the film’s failings forgiveable. Richard Jenkins is the film’s real hero. A versatile and underrated performer, much like man of the moment Mark Rylance, here Jenkins is a delightfully doddery and devoted deputy to Russell’s sheriff. Vulnerable and passionate, Jenkins is a joy to watch. This only makes the moments when Patrick Wilson’s character is left alone on the screen all the more painful. This is the film’s biggest mistake; leaving us alone with Wilson who frequently addresses the lord above him in embarrassing moments that try to reach for the philosophical. The film has been marketed as a deeply violent and disturbing watch; the opening moments reinstating this. Bloody and relentless, Bone Tomahawk certainly has its fair share of savage and gruesome predicaments but sadly this all descends into ludicrous and distasteful brutality as the film concludes, eventually familiarising far more with the likes of Eli Roth’s The Green Inferno than John Hillcoat’s The Proposition.