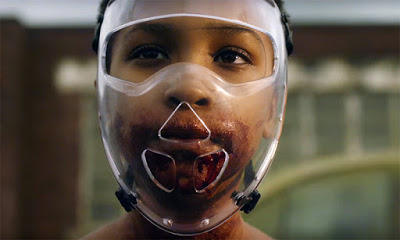 TV director Colm McCarthy has turned his hand to cinema with his debut feature The Girl with All the Gifts. Evidently inspired by Danny Boyle’s 28 Days Later, and other such Brit-zombie re-imaginings that have gone before it, The Girl with All the Gifts is a violent and sombre affair. We are introduced to a world already brought to its knees by a fungal infection that has spread to the masses. We spend our time in abandoned hospitals, clinical labs and industrial bunkers, surrounded by heavy army boots and machinery. This is a green and grey world, an aesthetic we’ve come to expect from this type of low budget independent feature. A new generation of zombies are confined to cold, concrete cells – all children. Each day they are strapped to wheelchairs and brought to a classroom. One bright young girl, Melanie, adores her teacher and shows exceptional intelligence. We are quickly shown that when confronted with the scent of human bodily fluids, the children become consumed with hunger, growing wide-eyed and vicious. It’s almost instantly apparent that Melanie is “special”; displaying unique abilities to fight her powerful urges to attack those she cares about and also to think philosophically. In the film’s earliest moments, there is a theme of confinement running through the narrative. There is discussion of both Pandora’s box and Schrödinger’s cat, whilst Melanie herself in trapped in her concrete prison. Sadly, such metaphors are lost as the film becomes weighed down by convoluted confusion and chaos. 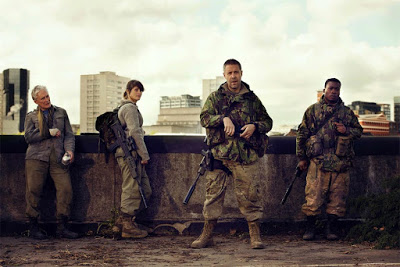 Half an hour in, the living dead force the soldiers, teacher and young Melanie to abandon their barracks. What follows is a conventional journey through a dangerous and lifeless world. Whilst those around her fear her gruesome capabilities, one member of the group sees Melanie as the sacrificial cure for the epidemic. This side note is too much and the film’s plot becomes quickly over-stuffed. Further problems occur as the narrative suffers from clichés and gaping plot holes. In its lowest moment the film morphs into a Lord of the Flies post-apocalyptic war zone for about fifteen minutes and then transforms back just as quickly. Paddy Considine and Gemma Arterton are wasted, although it is charming to see them dedicating their skills to home-grown, ambitious projects such as this. Glenn Close is captivating but, like both Considine and Arterton, let down by the script and limited characterisations. Sennia Nanua is Melanie, the film’s warped heroine. I found her performance to be quite irritating but perhaps this is a further reflection on the script and its worn out typical conventions rather than the actor herself. The film has several haunting, slick moments but they are ultimately lost in the density of a limp narrative. There is a fascinating, intelligent idea hiding at the root of this film. It’s a pity it’s lost beneath the film’s thick cinematic undergrowth of predictability and problems.

2 thoughts on “The Girl with All the Gifts.”