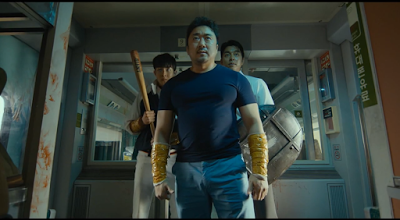 An explosive debut feature from Yeon Sang-Ho, Train to Busan joins the likes of A Girl Who Walks Home Alone at Night and Maggie as one of several recent and refreshing additions to the overcrowded zombie movie vault – here to rejuvenate the genre and breath new life into the un-dead. It’s the first zombie apocalypse movie to come out of South Korea and has been taking Asian audiences by storm. Now, with its attention to character and slick pacing, it’s proving to be as much of a niche hit over here in the UK. Train to Busan opens with an irritated truck driver entering a quarantined zone. After hitting a dear, our man drives off, unaware of the deer’s chilling rebirth taking place moments later in the middle of the road. As the film’s title interjected on the screen I realised how incredibly rare it was for me to be so very on board with a film in its first three minutes. We then meet a divorced fund manager whose demanding job limits his time and relationship with his young daughter. Feeling neglected, the child pleads with her father to let her take a train to Busan to see her mother. They board their train early the next morning. In the last moments before departure, a troubled individual sprints on board in a panicked state – bringing with them a fatal infection, which threatens the lives of all on board.  What ensues is gory and sporadic chaos as the many passengers fight for survival throughout the carriages. Joining our central father and daughter for the ride is a pregnant couple, a selfish businessman, two elderly friends and let’s not forget the teenage baseball team – equipped with wooden bats.

Train to Busan is a perfect mixture of horror and heart, fully deserving of all the hype that surrounds it. It’s a divine combination of the traits we’ve come to expect from zombie romps and an emotional core about fatherhood, selflessness and sacrifice – all intelligently directed and expertly shot. With a running time exceeding the two-hour mark, I was conscious there was risk of over-bloated action sequences and strained plot lines eating into the entertainment. Thankfully, Train to Busan is paced perfectly. There are stylish sequences that slot in between the tragedy without feeling clunky. There are suspenseful jumps and enough epic visuals to satisfy any traditional fan of the genre, all mixed in with an original philosophy and detailed explorations into the humane that will see art-house fans and tentative newcomers converted. There are classic moments we expect, nicely dispersed amongst original ideas. As survivors make their way from carriage to carriage I was reminded of the criminally under-exposed Snowpiercer. Moments later I was on the verge of tears as though it was a sequel to The Railway Children. Deliciously diverse and relentlessly intense, Train to Busan is a thrill ride I didn’t see coming which hit me at 300 kilometres an hour. Rising and falling elegantly with each new obstacle the characters face, Train to Busan proves that zombies can have brains…on trains. All aboard. 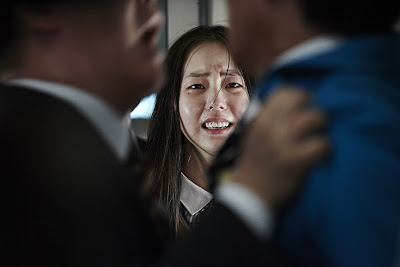