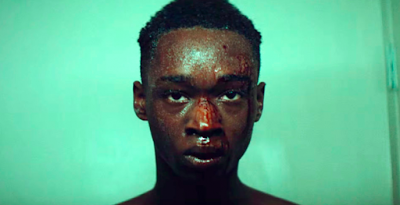 From its first intoxicating moment, to its last; Moonlight is the sensational underdog of this year’s American award season. Capturing the life and mind-set of a young boy entering adulthood in Miami, Moonlight captures the ugliness of adolescence, the agony of addiction and the frustration of growing up as a young, black, gay man in an ultra masculine world. We first meet nine year old Chiron running from schoolyard bullies, eventually taking refuge in a dilapidated crack den. His place of shelter is abandoned but filled with evidence of the violence and chaos that took place, in the form of bloody shards of glass and stained syringes, gathered at our protagonist’s feet. Taking refuge in such a place is the perfect introduction to Chiron who we go on to see at two later stages of his young adult life. His mother is an aggressive and manipulative addict, unable to provide for or protect her son effectively. Combine this lack of a maternal figure with Chiron’s own battles with his sexuality and this makes for a lonely internal existence – demonstrated through his on-going reluctance to talk. Moonlight is Barry Jenkins’ smash hit second feature, and his first for eight years. Brimming with numerous outstanding performances from its entirely black cast, Moonlight brings to light the modern African American experience which is usually entirely overlooked by Hollywood. Our protagonist’s introverted demeanor is visible in the film’s technical make up. Beautiful shots of Miami subvert the ugly experiences Chiron is going through in a home with no father and a mother whose selfishness stems from her dependence on crack cocaine. Based on both the play, In Moonlight Black Boys Look Blue, by Tarell Alvin McCraney and the real life experiences of director Barry Jenkins (who described his childhood in Miami as “a beautiful place where dark things often happened”) Moonlight is a remarkable feat on both a technical and an emotional level.

Divided into three equally hypnotic segments, Moonlight documents Chiron’s many obstacles as a young boy, a frustrated teen and as an isolated young man. Sexuality runs fluidly throughout; a key theme of each chapter that rests just below the surface, always present but allowing other themes such as drug abuse and street violence to take centre stage. It is so rare for a film divided into several blatantly separated sections to be so consistently brilliant. Each third has something different to say and Jenkins allows each story the space to breathe and enough time to develop beautifully and naturally. Chiron’s inner turmoil is captured in the eyes of all three actors who portray him – Ashton Sanders proving particularly enchanting in the central story. Mahershala Ali and Janelle Monae, who also feature together in another Academy Award Best Picture nominee , Hidden Figures, both give understated supporting performances as two sources of comfort and refuge for Chiron. Hidden Figures celebrates the achievements and triumphs of African Americans in white washed history but, as a piece of cinema, lacks the sincerity and authenticity of the story Moonlight tells. Meanwhile Naomi Harris is a ghost in a shell, an actress who’s dissolved into the addict she encompasses. Her interpretation of Chiron’s mother is her first experience of portraying a woman in a negative light, something she vowed she would not do in her career. Jenkins’ experiences with his own mother on whom the character is based drew Harris back to the part and she handles it with all the grace and grit we could have wished for. Moonlight meanders seductively, not in a rush to tell its story, rewarding the audience’s patience with a film that shows conviction and originality from start to finish.

One thought on “Moonlight.”