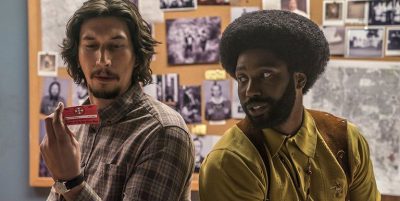 Spike Lee’s latest, loosely based on the early career of police-officer Ron Stallworth, opens with an icon scene from 1939’s Gone With the Wind. An iconic moment in American cinema, a distressed Scarlett O’Hara is wading through a sea of injured civil war soldiers. The camera gradually draws out, revealing the vast extent of the wounded. Continuing to draw out and up, the scene settles on the torn remains of the confederate flag, flapping in the wind. On one hand, BlacKkKlansman is a seventies buddy cop movie – rich in charisma and comedy. On the other hand, it’s a more serious thought piece, directly challenging American cinema’s historic crimes against African Americans, the astonishing re-rise of the alt-right and their place within modern day politics. Perhaps a simpler way of describing BlacKkKlansman is simply as a really solid, typical Spike Lee movie – rich in protest, angst, humour – all briskly stirred together and lent against a stellar time-capsule of a soundtrack. As with almost all of Lee’s movies, it’s angry, ambitious and thoroughly entertaining. In the early 1970’s, Colorado’s first black police-officer takes it upon himself to infiltrate the Ku Klux Kan. When initial contact over the phone leads to an invitation to meet in person, Stallworth must enlist the help of a narcotics detective to play the racist, venomous character initially created over the phone. What follows is your typical undercover cop movie, with a little extra protest and horror thrown in. Like all the greats of the genre before it, BlacKkKlansman is all wire taps and bluffing with many an anxiety inducing scene in which the infiltrated come close to uncovering the infiltrator. Whilst the investigation develops, so does Stallworth’s relationship with a passionate Black Student Union President – who disagrees with the idea of making change happen ‘from the inside’.

Although BlacKkKlansman is problematic in regards to both its narrative flow and its editing, it’s undoubtedly a powerful protest; a middle finger up to The Birth of a Nation – D.W. Griffith’s 1915 historical epic which Lee has continued to hound for its glorified racism and heinous stereotypes since his days as a film student at NYU. Where I’ve previously found some of Lee’s work a little too on the nose, I thoroughly enjoyed the occasional smug chuckle brought on by BlacKkKlansman when ideas about the future of American politics are discussed. Meanwhile, at both the film’s open and close, it’s as though Lee is speaking directly to Trump – taunting him by casting his famous impersonator Alec Baldwin in a brief role or, as the film closes, directly referencing his abhorrent response to the 2017 Charlottesville alt-right rally which resulted in the murder of a protester. The film is powerful in a way that caught me off guard – prompting a very emotional reaction at several key points. The story is carried by solid turns from both Adam Driver and John David Washington. Washington is an amusing protagonist, 80% fiercely determined and 20% straight up daft. Driver is right at home in a Lee film, bringing his usual intense but subdued fury to the role of a Jewish officer trying to keep the investigation from getting personal. Laura Harrier also brings an engaging energy and a justified anger to the role of Student Union President. Meanwhile the KKK members themselves are equal parts buffoon and terrorist thanks to their portrayals by Ryan Eggold and Jasper Pääkkönen. David Duke is given the perfect blend and balance of idiocy, malice and contradiction by Topher Grace, an actor who continues to mature and mellow. BlacKkKlansman does a great job of connecting the dots between the then and the now without ever feeling like a stuffy history lesson. It’s a highly entertaining cop flick which simultaneously puts some very painful truths into perspective.